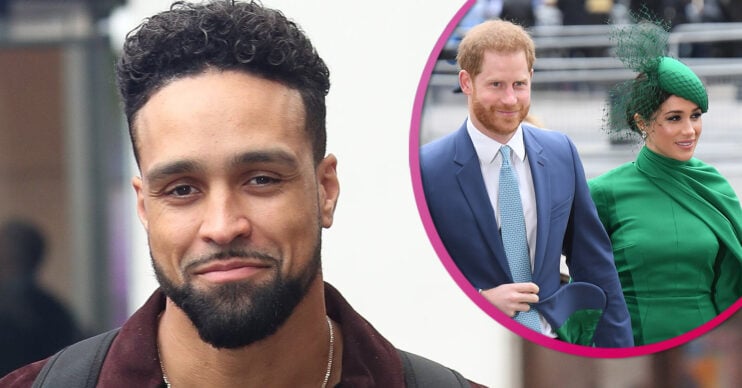 The Dancing On Ice star said the Duke and Duchess of Sussex helped him whilst he was going through a ‘dark period’ following the Diversity Ofcom row.

What has Ashley said about teaming up with Prince Harry and Meghan?

Speaking on FUBAR Radio, Ashley said: “I think the paths might cross at some point, I’m not sure how.

“There’s been a couple of conversations, but, yeah. I’m hoping that our paths cross.

“That’s all I’m going to say. Keep it under wraps as they say.”

Ashley went on to discuss his bond with the couple, joking that they “are buddies now”.

He added: “We’ve got loads of like loads of common ground, things that we just both relate on.”

The dancer also spoke about the moment Harry and Meghan got in touch after the BGT backlash.

He said: “It was just one of many conversations I had that was like, got me through that sort of like really deep, like dark period.”

What did Ashley say?

Last year, Ashley told Lorraine Kelly on her show about the call he received from Meghan and Harry.

“We spoke things through and they just told me that they were there for me and I can always lean on them.

“They were really great about it and shared a lot of knowledge with me.

“They opened my eyes to a lot of things I wasn’t aware of actually, so I was really grateful to both of them.”

Meanwhile, Harry told the Evening Standard: “We spoke to Ashley Banjo a few weeks ago, straight after the Britain’s Got Talent situation.

“And that in itself, I am sure even me talking about it will be controversial.

“But the reality of it is he and his team of guys put on the most amazing display.”

Do you want to see Ashley, Harry and Meghan team up? Leave us a comment on our Facebook page @EntertainmentDailyFix.