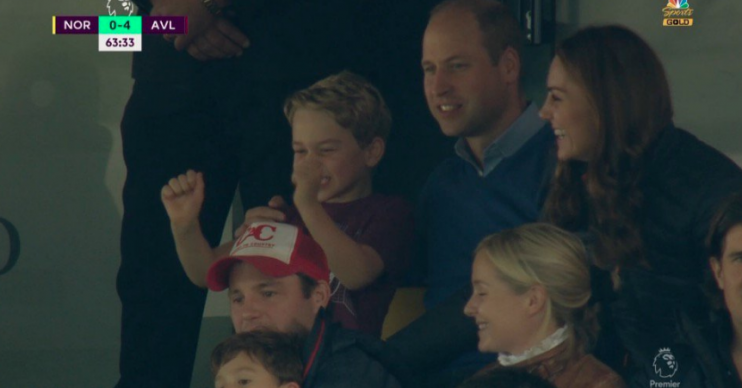 Looks like George matches his father's passion for the beautiful game

Prince George gave his footballing heroes the royal seal of approval as he punched the air with joy following a goal earlier today.

The six-year-old, sister Charlotte and parents Prince William and Kate Middleton were all in attendance at Norwich City’s ground as the East Anglian side took a Premier League thumping from Aston Villa.

George’s dad Prince William is the Birmingham club’s most famous supporter. But it looks as if George matches his father’s passion for the beautiful game – and those watching the match at home seemed to be impressed.

Villa ended up winning 5-1 at Carrow Road – and cameras caught George celebrating after his team put away their third goal.

An Aston Villa fan, referring to the order in which the match highlights are broadcast on the BBC’s flagship football show, joked in response: “Make sure we’re on first tonight.

“Or you will have the future king to answer to.”

Other fans adored seeing how the young family spend time together.

One remarked on Twitter: “Prince George and Princess Charlotte watching the Villa today with their mum and dad. Families and football. Brilliant!”

“Can we make Prince George man of the match?” wondered another person.

Prince William was seen celebrating exuberantly earlier this year as Villa secured promotion over Derby in the play-offs.

He previously recalled about the first game he attended nearly twenty years ago: “It was fantastic, I sat with all the fans with my red beanie on, and I was sat with all the Brummie fans and had a great time.

“It was the atmosphere, the camaraderie and I really felt that there was something I could connect with.”