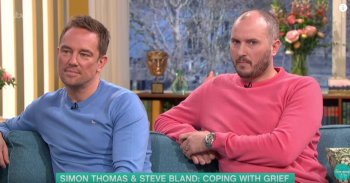 They both spoke on their son's losses ahead of Mother's Day

Simon Thomas has opened up on his devastation as his young son Ethan is forgetting memories of his late mum, Simon’s wife, Gemma.

Gemma Thomas, died in November 2017 just days after she was diagnosed with acute myeloid leukaemia.

Sky Sports presenter Simon appeared on This Morning along with late BBC star Rachel Bland’s husband Steve to speak about dealing with grief.

Simon, 46, revealed that he used to leave notes in Ethan’s lunch box after Gemma’s passing, but he stopped when he thought the nine-year-old didn’t want them anymore.

He explained that Ethan then asked why he had stopped because he now wants the notes “more than ever.”

“Ethan has a different understanding of death,” Simon said as he compared him to Steve’s three-year-old Freddie.

“What has been really hard for him that the everyday memories of mum are starting to fade,” he continued.

Simon also recalled that Ethan asked if his mum had ever packed his lunches, adding: “Nearly sixteen months later the memories of mum are fading.”

Steve also bravely opened up on his struggles after losing his partner Rachel last year.

Rachel, who was a host on BBC Radio 5 Live, wrote a book for their young son Freddie.

When asked about the effect Rachel’s death has had on their child, Steve said: “He understands that mummy has gone… but I think he thinks ‘died’ is a place.”

In December last year, Simon also opened up about his new relationship and how he was dealing with moving on.

Read more: Jeff Brazier told his sons their mum Jade Goody became a star after she passed away

During an interview on Loose Women, he said: “You have to try and find some kind of life again. When people go through something like this you can give up on life… I just want to be happy again.

“I didn’t expect to be in a relationship this early but I want to be happy.”