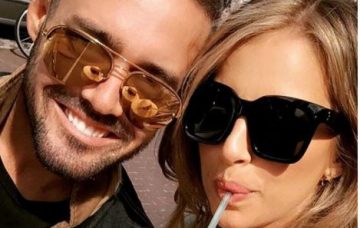 Model Vogue Williams has debuted her baby bump, and apparently confirmed she is expecting a boy.

The 32-year-old is on holiday in Greece with her fiancé, Spencer Matthews, and shared pictures of her blossoming bump with her 274,000 Instagram followers.

The TV presenter took two snaps at the side of a pool, one from the front with no bump visible and one from the side that showed she is expecting.

She did this to hit back at claims she’s been filtering previous photos where she doesn’t seem to have a bump.

“These photos were taken within half an hour of each other,” she told fans.

“Front on no bump, side profile POW there he is! So glad my bump has finally popped. I never alter my body in any pictures, if you can’t see my bump it’s just because of the angle although I may only take side profile shots from now on!”

Vogue’s fans were quick to praise her for setting the record straight – and note her use of the pronoun “he” in the caption.

Confirmation that Vogue and Spencer are expecting a boy?!

Vogue had appeared to let slip the baby’s gender during an interview last week on Brendan O’Connor’s Cutting Edge on RTÉ One.

She answered a question about the child with the pronoun “he” before realising what she’d said!

After the host asked if that was confirmation the baby is a boy. she said: “I hate you! I knew I would do it! Maybe it’s a boy, maybe it’s a girl. Is it too late?!”

Vogue and Spencer met when they both appeared on Channel 4’s The Jump last year.

Former Made In Chelsea star Spencer proposed in January, and in March, they announced their first child is on the way.

Vogue told Hello magazine: “We were together when we did the test, on holiday in the South of France over Christmas, and we were just like, ‘Wow’. Regardless of how long you plan it for or how long you’ve wanted it, it’s still like, ‘Oh my God!’ It’s such exciting news.”

Spencer added: “I think we were more taken aback by how quickly it had worked, as opposed to the fact we’re having a kid. Because we had already begun to try, so I just considered myself the luckiest man in the world when we got the baby news.”

The couple have just wrapped a sunshine holiday together in Greece.

In a sweet post to Instagram on their final night abroad, Spencer said: “Last night was magical… We are FAMILY… Can the little one hurry up already?”

Vogue said: “The end of our amazing holiday… there is nobody I would rather be with.”

Did you accidentally reveal your baby’s gender without meaning to? Did you find out the baby’s sex before birth? Leave us a comment on our Facebook page @EntertainmentDailyFix and let us know what you think!