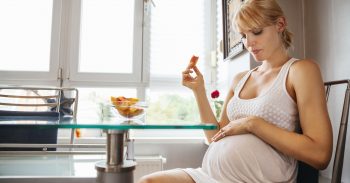 She's been on the plant-based diet her whole life

A pregnant woman was left dumbfounded when her husband suggested she should change her vegan lifestyle for the sake of their baby’s health.

The mum-to-be said she’s followed a vegan lifestyle her whole life and even her hubby is on the plant-based diet too as she does the food shopping and cooking.

However, the woman said her partner is concerned meat is necessary for maintaining the health of their baby and he’s worried about its iron levels.

The woman, who said she never stops her husband eating what he wants, questioned if feeling upset by her husband’s request was “unreasonable” or if her hormones were impacting her reaction.

Taking to Mumsnet to ask for advice, the woman wrote: “I have been vegan my entire life. My parents are vegan and my siblings are. My husband is mainly vegan as I do the food shopping and cooking.

“I am in the very very early stages of pregnancy and since we found out, DH [darling husband] keeps making hints that I should be eating meat to keep the baby healthy.

“I have never had any problems with my iron levels etc but I have never been pregnant before.

“DH has upset me by suggesting I go against something which is obviously a huge part of my life but I don’t know if I’m being unreasonable to be upset or if hormones are making me think more of it?”

Fellow users were quick to offer the woman advice, with one person suggesting she get test at a nutritionist to put her husband’s mind to rest.

They wrote: “It’s not right that he should be so controlling over your diet. Having a baby on the way is anxious time for everyone and perhaps he is being a big clumsy in expressing his concerns.

“Maybe if you had your iron level checked (a good idea for all pregnant women) it would put his mind at ease?”

Another said: “He is no doubt worried, I get why you’re upset, his suggestions show that he doesn’t truly get what a fundamental part of who you are this is.

“As a lifelong vegetarian, I think it’s hard for meat eaters to truly understand that, so you probably need to explain it to him and reassure him that you will ensure that you and the baby get all the nutrients you need and will take medical advice about how to do this in a way which is consistent with your beliefs.”

However, others defended the dad-to-be.

One person said: “Your baby can get very very sick or die if you aren’t getting the right nutrients. I think his intentions are good.”

Another added: “I think he has good intentions and I don’t think he’s being unreasonable to bring it up, but it’s a question for your doctor surely?”