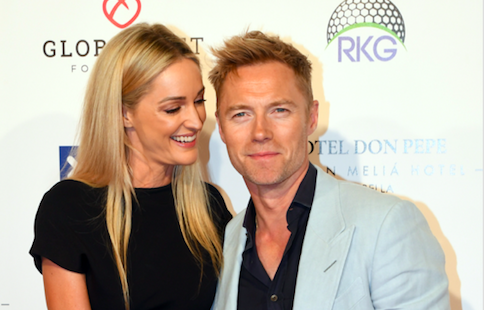 Storm and Ronan are expecting their second child together

Ronan Keating’s wife, 38, sat on a beach towel as she cuddled next to their son Cooper, 2, for the heartwarming snap, shared to her Instagram followers.

Enjoying a flight layover in Australia, she simply captioned the picture with “B.O.N.D.I” with the Australian flag and tagged the photo as being taken at the world famous Bondi Beach.

The fashion designer paired her pink bikini top with a pair of white short shorts and a floppy sun hat.

Last month they announced they were expecting their second child together.

“Another little Keating on the way.”

Ronan announced the big news by sharing a picture of Cooper kissing Storm’s baby bump beside a canal in a snowy Amsterdam to his Instagram followers.

Read more: Ronan Keating’s daughter fails to make it through on The Voice

She captioned the post: “Another little Keating on the way.”

He said: “Storm and I are having a baby! It’s really exciting. She’s feeling great.”

The former Boyzone singer also has three children from his previous marriage to Yvonne Connolly.

Storm admitted that she told Ronan she wanted children on their first date.

Speaking to the panel on Loose Women, she explained that he wasn’t initially sure if he wanted anymore.

She said: “He [Ronan] wasn’t sure if he wanted to have more children and that was really difficult for me because I always pictured having kids of my own and I come from a really large family.