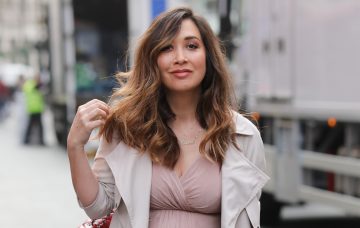 She is due later this summer

Myleene Klass has shared an update in her pregnancy journey by sharing clips of her baby kicking in her tummy.

The Smooth radio host posted two sweet videos on her Instagram Stories, which showed her unborn child “having a party” inside her huge bump.

The footage showed Myleene’s bare tum jolting up and down as her little one, affectionately called “Snoop” for now, moved around.

“Snoop’s having a party in there!” she told her followers.

The 41-year-old star shared another shot where her belly appeared to change shape as the baby kicked.

“Stepping it up a gear,” she added.

Myleene, who has Ava, 11, and Hero, seven, with ex-husband Graham Quinn, is expecting her first child with boyfriend Simon Motson.

They announced their exciting baby news on Valentine’s Day this year.

Heavily pregnant Myleene is believed to be due next month. But recently she made it clear she isn’t slowing down with her work.

She aired her frustration when asked when she will stop working. She vented online, insisting pregnancy should be seen as a privilege and not an illness.

The former Hear’Say star ranted on Instagram: “Seriously!!!! If one more person asks when I’m stopping working! I’m pregnant, not sick, it’s a privilege to carry a child, not an illness!”