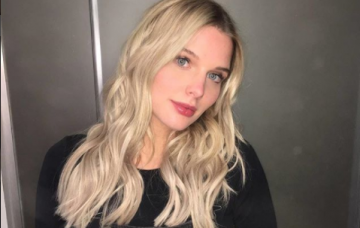 She's filming her final scene as Rosie Webster on Friday - so soon!

Helen Flanagan has said she can’t wait to have her second baby next month, as she shared new pictures ahead of filming her final Coronation Street scene.

Updating her Instagram Stories with a selfie of her baby bump taken at Heathrow Airport, she wrote: “Can’t wait to have no nausea or sickness, not long now.”

The Coronation Street actress has previously spoken about how unwell she’s felt in her second pregnancy.

She told her Instagram followers that in her first trimester she was “just completely wiped out with sickness” and by the second when morning sickness usually eases, she still felt “a little bit of nausea and sickness”.

She added: “This is really not a moaning post at all I know how very lucky I am to be pregnant just posting about my pregnancy sickness for other pregnant women to relate to… it’s nice to get other tips of other women with pregnancy sickness as you feel less on your own with it.”

The 27-year-old, who already has a daughter Matilda, two, with partner Scott Sinclair, has been keeping fans updated on her pregnancy via social media.

In her latest snap, she looks glowing as she shows off her baby bump in a black top and leggings with a big smile.

Her fans told her she looked “beautiful” and “lovely”.

“You make it look so easy,” one said of how the soap star looks at eight months pregnant.

“How do you look so fabulous this far gone? I looked like an actual potato pregnant. Ha!” said another.

She gained a similar response when she shared pictures of her bump yesterday, where she’s pictured from the front with her blossoming stomach underneath a blue checked maternity top.

She simply captioned the picture, “8 months” with a pregnant woman emoji and a blue and pink heart to illustrate she and Scott don’t know the sex.

“You look glowing!!” one fan told her, while a second said she looked “blooming lovely.”

“You make pregnancy look flawless. A far cry from my preggo days lol,” said another.

A third agreed, writing: “You look amazing! I’m 35 weeks tomorrow with my second baby boy and no way do I look as good as you!”

In another photo, she’s seen at the shops with Matilda, writing: “Love being a mama more than anything.”

Helen starts her maternity leave this week after filming her final scene at Corrie as Rosie Webster on Friday.

Sally Dynevor, who plays her on-screen mum, told Lorraine on Tuesday how much she is going to miss her.

“I will miss her so much, she’s such a treasure,” she said. “We cried so much the other day. She’s still got a scene to do on Friday but I am going to miss her, she’s such a little sweetie.”

On Monday, Helen told the Loose Women her exit scenes will be “hilarious”.

She said: “I’m going out in very much a Rosie style – the storyline is hilarious. But I have enjoyed that about my character, doing comedy has been great.”

She added that she’s sure the crew will be happy to see the back of her baby bump since it often disrupted filming.

“The crew will say ‘oh sorry, we have got to go again because we can see too much of the baby bump’ but there is only so much you can do to hide it! They do a good job,” she said.

Helen has said she hopes to return to Corrie but for now she’s looking forward to being a mum again, even if her second baby wasn’t planned.

“It was a surprise – I’d just gone back to Coronation Street and I was really enjoying that, but obviously it’s a blessing and I feel really lucky to be expecting another baby, but it wasn’t in the plan,” she said.

Will you be sad to see Rosie leave the cobbles? Leave us a comment on our Facebook page @EntertainmentDailyFix and let us know what you think!