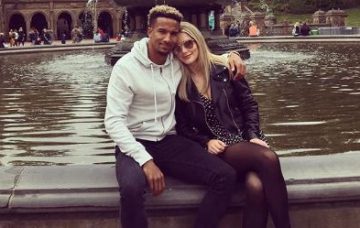 Footballer Scott popped the question in a magical way!

The actress, who plays Rosie Webster on the soap, looked stunned as her footballer beau dropped to one knee and proposed during a recent holiday to Disney.

Scott, who plays for Celtic, shared a photo to Instagram of the moment he popped the question.

He is seen on bended knee, with ring box open, while pregnant Helen looks overwhelmed with happiness.

The couple have been together since 2009 and share daughter Matilda, two.

Their second child, another daughter, is due in the coming weeks.

Helen and Scott had often been asked in interviews when they might get engaged, with Helen saying just last month she’d been dropping hints about a ring!

She told OK! magazine: “I’ve pointed Scott in the right direction for an engagement ring!

“We’ve been together for nearly nine years and we’ll soon have two kids, so it’s about time. But I want to have a romantic proposal, first of all!”

Helen added she would love to have a third child one day, but not until they tie the knot.

Helen, 27, and Scott, 29, announced a second baby was on the way at Christmas, and later confirmed it will be another little girl.

The couple have been living part of the week in different cities over the last year, as Corrie is filmed in Manchester, while Scott is based in Glasgow for his football.

Helen, who returned to Corrie last year after a long break, previously told Loose Women that she and Matilda live with her parents in Manchester during the week and then travel to Glasgow at the weekends.

“It’s really lovely, actually. It’s nice to have a break,” she said.

Helen has just said goodbye to Corrie once again, however, as she’s now on maternity leave.

Her exit storyline will involve cameo appearances from This Morning’s Holly Willoughby and Phillip Schofield!

Holly and Phil will interview characters Rosie, Gemma Winter and Craig Tinker after an incident on the cobbles.