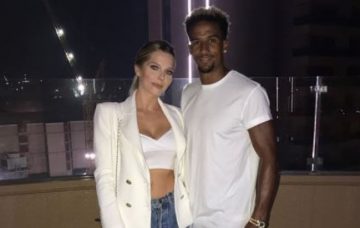 The Coronation Street actress is currently pregnant with the couple’s second child, and joked to OK! magazine she may have dropped a few hints about wanting a ring!

She said: “I’ve pointed Scott in the right direction for an engagement ring!

“We’ve been together for nearly nine years and soon we’ll have two kids, so it’s about time. But I want to have a romantic proposal, first of all!”

Helen, who shares two-year-old daughter Matilda with Celtic footballer Scott, added she would love to have a third child one day, but not until they tie the knot.

Helen, 27, and Scott, 29, announced a second baby was on the way at Christmas, and just this week confirmed it will be another little girl.

The couple have been living part of the week in different cities over the last year, as Corrie is filmed in Manchester, while Scott is based in Glasgow for his football.

Helen, who returned to Corrie last year after a long break, previously told Loose Women that she and Matilda live with her parents in Manchester during the week and then travel to Glasgow at the weekends.

“It’s really lovely, actually. It’s nice to have a break,” she said.

Helen has just said goodbye to Corrie once again, however, as she began maternity leave last week.

Details about her character Rosie Webster’s exit storyline have been kept under wraps for now, but Helen has promised it won’t disappoint fans.

“I’m going out in very much a Rosie style – the storyline is hilarious,” she told Loose Women. “But I have enjoyed that about my character, doing comedy has been great.”