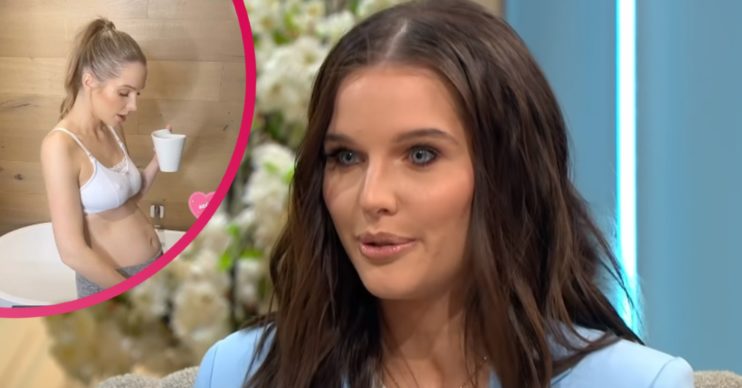 The former Corrie star is expecting her third child

Helen Flanagan has opened up on her tough pregnancy journey after experiencing extreme morning sickness.

The former Coronation Street star, who is expecting with her third child with fiancé Scott Sinclair, admitted it hasn’t been easy as she cradled her baby bump on Instagram.

The actress, 30, was even unable to leave the house at one point.

What did Helen Flanagan say?

Despite looking incredible as she gave followers a glimpse of her blossoming bump, Helen revealed her third pregnancy has been challenging.

She shared a shot of herself posing and wrote: “I haven’t found this pregnancy easy at all. I’ve had hyperemesis gravidarum which is really extreme morning sickness.

The entire experience has been a real challenge

“I had it before with both girls but this time has been SO tough. I felt weak most days and really struggled to eat – it was a vicious circle because the more hungry I got, the more sick I was. It made me feel really low, it just felt like it would never end.

“No one wants to feel like that, especially during a time that should be so exciting. The entire experience has been a real challenge and exhausting both physically and mentally.”

The former soap star added: “One of the worst things about HG is how isolating it is. I couldn’t go out, I couldn’t cook, even talking on the phone for too long would make me ill.

“One thing that helped keep my spirits up during this time was @peanut. Being able to open the app and read other women’s experiences and messages of support was a great comfort and helped me know that I’m not alone.”

Fans rushed to show their support, with one commenting: “Hope you get better soon. it’ll all be worth it at the end.”

A second said: “Your doing an amazing job beauty! Well done for being so open about your experience I’m sure it will help lots of other women who are also struggling.”

When is Helen expecting her third baby?

Helen and Scott, who already have daughters Matilda, five, and Delilah, one, together, are set to become parents next year.

Posting pictures on Instagram which showed her two daughters holding pictures of her sonogram, the actress wrote: “Our 3rd baby arriving March 2021 @scotty__sinclair.”

As well as a baby, the couple are also planning on tying the knot.

The professional footballer popped the question during a family trip to Disneyland Paris last year.

Would Helen return to Coronation Street?

The actress, who rose to fame as Rosie Webster, previously admitted to ED! she would love to return to the ITV soap.

She said: “I do miss Coronation Street. I started there when I was nine as a child actress so obviously it’s been a huge part of my life and I’ve been in and out of it in my twenties so obviously I do really really miss it.

Helen added: “I would love to go back at some point, I really really would.”