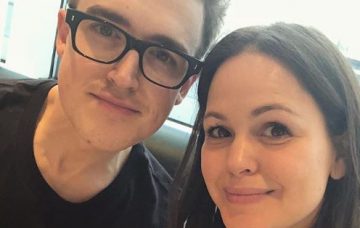 It has been six years since Giovanna married husband Tom!

Giovanna Fletcher has posted a stunning picture of herself in her wedding dress, to mark the sixth anniversary of her marriage to husband Tom Fletcher.

Captioning the gorgeous snap, “About to walk in and marry the love of my life #sixyears #anniversary”, Giovanna, 33, looks beautiful in an ivory dress and full-length veil, holding an impressive bouquet of pink peonies.

Fans were in awe of Gioavanna’s throwback, with one follower writing, “You looked so beautiful and graceful. You look even happier now though lovely lady, with your beautiful family and another bambino on the way.”

Others agreed the bride-to-be looked ‘stunning’ and sent their well wishes for her and Tom’s anniversary.

Tom, 32, also posted his own message, alongside a black and white picture of him and Giovanna on their wedding day.

This was us 6 years ago looking absolutely miserable having just promised to annoy each other for the rest of our lives. Happy 6th wedding anniversary @mrsgifletcher. X

“This was us six years ago, looking absolutely miserable having promised to annoy each other for the rest of our lives. Happy 6th wedding anniversary @mrsgifletcher.”

He also posted a picture of his anniversary card for Giovanna, on which he’d crossed out ‘Birthday’ and replaced it with ‘Anniversary’.

The couple are childhood sweethearts and first met at Sylvia Young Theatre School when they were just 13.

Despite not getting hitched until 2012, their wedding went down in celebrity history as one of the cutest and unique days.

After writing McFly song, All About You, as a Valentine’s Day gift, Tom sang a reworked version on the day – leaving everyone, including us, in tears!

Of course, it also went viral, as did their two adorable videos announcing that Giovanna was pregnant – their latest featuring a snowman holding the new baby scan.

They now have two children – Buzz Michelangelo, four, and Buddy Bob, two, – and have a third baby on the way in September, recently revealing they won’t be finding out the sex.

Although most of the couple’s time is now spent parenting their two boys, Giovanna and Tom try to squeeze in date nights when they can – although it’s definitely their sense of humour that gets them through!

Earlier this week, Giovanna panicked that her waters had broken four months early, but the pair instantly lightened the mood when they realised that one of the children, sleeping in their bed, had peed on them.

Oh the glamour – we love these two!

Giovanna has also built up a huge fan base by being honest about motherhood and the fact that she’s often found in ‘dungarees’ with scraped-back hair.

You look just as gorgeous as you did on your wedding day, Gi!

Will you be taking inspiration from Giovanna’s wedding look? Are Tom and Gi your #couplegoals? Leave us a comment on our Facebook page @EntertainmentDailyFix.