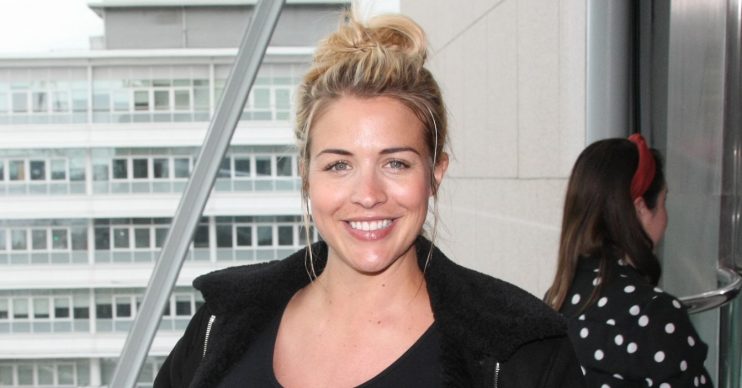 Pregnant Gemma Atkinson indulged her inner fangirl as she headed to see the Backstreet Boys perform at the Manchester Arena.

Posting to her Instagram Stories ahead of the gig, Gemma looked gorgeous as she revealed that she was so excited for the show, she was’ considering writing the band’s initials on her face in pen.

She asked her followers: “Question. Is it frowned upon for a 34 year old woman who’s pregnant to put Backstreet Boys initials on her face before their concert?”

The star, who is expecting her first baby with Strictly Come Dancing star Gorka Marquez, then tried to kid her followers into believing she was “asking for a friend”.

She continued: “I’m asking for a friend obviously because I wouldn’t do that.”

With what looked like a black Sharpie in hand, Gemma added: “I’m going to take my pen just in case said friend wanted to do that on arrival. If all the cool kids are doing it she may as well join in.”

Posting as she took her seats for the gig, it appears as if neither Gemma – nor her friends – decided to decorate their faces.

Instead, she told her followers: “All set to watch the Backstreet Boys at the Manchester Arena. Baby Marquez better be ready for some dancing.”

She was also pictured posing next to a poster of herself at the arena, in which she was wearing a T-shirt emblazoned with the word fabulous.

Gemma kept her followers up to date with her antics, posting videos of the boys singing some of their greatest hits to the sell-out crowd.

Afterwards, she revealed that her “obsession” was back.

She said: “Okay my obsession is back. I felt 17 again. Backstreet Boys were incredible! Vocals amazing, show was amazing and they defo still got it.”

What do you think of pregnant Gemma’s big night out? Were you at the show? Head over to our Facebook page @EntertainmentDailyFix and let us know!