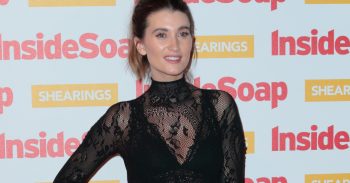 They were enjoying some family time!

Charley Webb has shared the cutest photo of her two sons Buster and Bowie.

The Emmerdale actress, who plays Debbie Dingle on the ITV soap, took to Instagram on Tuesday to post a snap of Buster, nine, and Bowie, three, sporting football t-shirts.

Charley, who is pregnant with her third child, told her fans that her boys had just enjoyed a water fight.

This is how we roll after water fights☀️

The photo shows Buster and Bowie facing away from the camera alongside the family dog.

Buster sported a red football shirt while Bowie sported a yellow one, which seemed a little too big for him as it almost covered his feet.

Charley, who is married to fellow Emmerdale actor Matthew Wolfenden, captioned the post: “This is how we roll after water fights.”

Fans loved the sweet snap, with one person commenting: “Lovely pic of them!”

Another wrote: “Just adorable,” and a third gushed: “Love how the dog is joining in.”

At the weekend, Charley shared a string of pictures of her boys enjoying an Easter egg hunt.

Big brother Buster is shown getting an egg from a high branch in one pic and in another adorably holding hands with Bowie.

In another they’re shown sitting on the doorstep and tucking into their chocolate findings.

Charley announced in February that she and Matthew are expecting their third child together.

The actress shared the news with fans by posting two cute pics on Instagram with the caption: “#Number3.”

The snap showed her standing with hubby Matthew and their kids, holding a lightbox that reads “Buster, Bowie And” with a blank space for a third name.

Speaking to OK! Magazine last month, the couple revealed they told their boys they were going to be big brothers on Christmas Day last year.

Matthew said: “We told the boys on Christmas Day when Charley was 11 weeks pregnant.

“They had some joint presents and the final one was a teddy bear with a note attached which read: ‘Please give this to your baby brother or sister when they arrive in July, love Santa.'”

Matthew, who plays David Metcalfe in the soap, said he and Charley have always planned to have a big family.

He added: “We’ve always wanted a big family. It feels different this time as it feels like we’re going from a family to a gang. We’re looking forward to the chaos another child will bring.”

Charley and Matthew have been in a relationship since 2007.