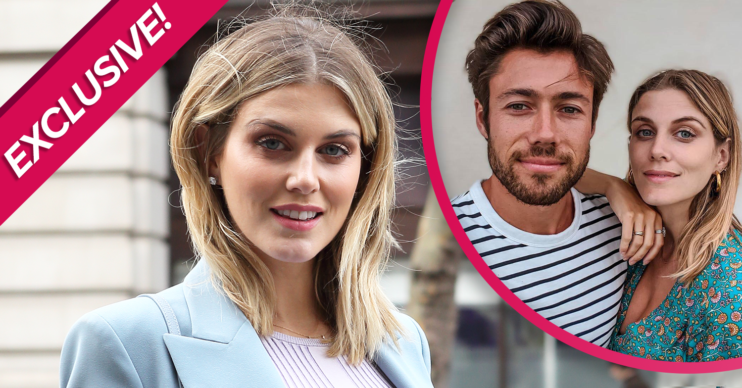 Their first child is due in January

She may only be halfway through her pregnancy with her first child, but Ashley James has revealed she can’t wait to try for baby number two.

Speaking exclusively to Entertainment Daily, the former Made In Chelsea star revealed she’s desperate for a little girl.

Ashley is currently pregnant with a baby boy, her first child with boyfriend Tom Andrews.

The tot is due to arrive in January next year.

And, while Ashley can’t wait for his safe arrival, she told us that she wants to try for a baby girl as soon as she can.

Ashley James on her baby names

Asked if the couple have decided on a name for their new baby, Ashley revealed the soon-to-be parents have it all planned out.

“We decided early on, before we knew we were having a boy,” she said.

“It was quite easy for us, Tommy has always had a boys’ name in mind and I quite liked it.

We have our little girl name for when we have a girl next. I would love to have a little girl.

“I’m into quite weird, wacky spiritual names and he vetoed quite a lot of them, but I’ve managed to get one of those as a middle name,” she added.

“We have our little girl name for when we have a girl next. I would love to have a little girl,” she said.

“I would also like for there not to be a big age gap, but you don’t know what’s around the corner.

“If I will be able to, I would love to have a little girl. But I feel like I’ll be one of those mums who ends up with an army of little boys, always trying for a little girl.”

Although it sounds as if she won’t be content until she gets her longed-for baby girl, Ashley is happy with things staying as they are with Tom.

Why doesn’t Ashley want to get married?

“I’m not really into marriage,” she told us.

“I’m really happy for anyone that wants to do it, but for me it’s never really been on my agenda. I think it’s something a lot of people do because they feel they should.

“I don’t like the idea of wearing a white dress as if virginity and purity is a value for women, and being walked down the aisle by a man to be given to another man doesn’t excite me,” she said.

Ashley added: “I’ve never really dreamt of a white dress and everything else, I’d rather focus on my career. I think we can be really great parents without the tag of marriage. I don’t need that as a sign of commitment.”