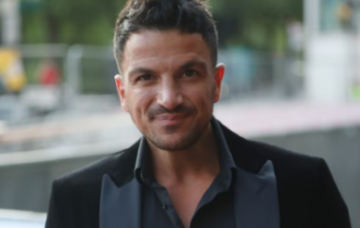 Peter Andre was overcome with love for his sister today and took to Instagram to show it!

The Mysterious Girl singer posted a snap of his sibling, Debbie, writing beside it: “Let’s make today the official ‘love your sister day.’ Or not. You don’t have to. Anyway, Love you sis.”

The image was a headshot of his sister, which he previously shared with his 802k followers to celebrate her birthday in August.

Let’s make today the official ‘love your sister day.’ Or not. You don’t have to. Anyway, Love you sis 🙂 @thebeautycouture

Those who missed it the first time around commented to say how much they thought Debbie looked like Pete.

A third wrote: “Gorgeous photo. She’s image of you,” while a fourth exclaimed: “Omg. Double. Looks like you with long hair.”

Peter comes from a large family. As well as sister Debbie, he grew up with brothers Andrew, Chris, Danny and Michael.

Sadly Andrew died of kidney cancer four years ago at the age of 54, which has prompted Peter to work tirelessly for cancer charities ever since.

At a fundraising event for Cancer Research UK in April, he spoke of the devastating effect Andrew’s loss has had on the family, and how they still struggle to talk about it.

“When someone in your family goes from this terrible disease, many people’s lives are affected – brothers, sisters, parents, children, husbands, wives and so on,” he said at the Jog On To Cancer event.

“The thing is, as a family we are so devastated by this loss, we still don’t sit down and talk about it because it is so raw.”

The father-of-four said he works with cancer charities as he wants to be “part of the solution” and help other families.

Meanwhile, Peter also revealed this week that he would love to do a TV show with his wife Emily.

He told Best magazine he and Emily, a doctor, talk a lot about doing a show set in an A&E where she can lend her medical expertise and he can present.

Can you see the resemblance between Peter and his sister? Leave us a comment on our Facebook page @EntertainmentDailyFix and let us know what you think!