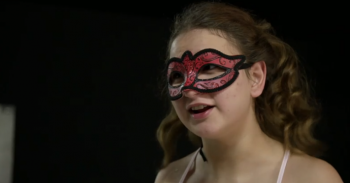 The actress had only been in the job for a week

They heard tales of human trafficking, forced drug use and physical violence, but one story in particular left them horrified.

The scene in question was so hard to stomach, the Brits were completely shaken and some were even reduced to tears.

The filmmaker told them: “I find girls who don’t know anything about anything.

“95% of the girls who come here are new, so I teach them, especially young girls.”

He was seen filming a session involving one young woman and a big group of men.

The star was a Russian, aged just 19, who was said to be taking home just over £2500 for her part in the production.

Although the actress wore a red eye mask, one of the Brits was concerned she might be under age and asked to see her ID.

Filming was delayed at one point because the young actress was full of nerves.

What’s worse, she apparently had no idea she was going to be having sex with 20 men – all of whom were also wearing masks.

She said she thought it was only going to be half that number.

Torbe, the director, was confronted about it but said there were so many present only because they were filming “two scenes” on that day.

He insisted everything was in order, but the tearful Brits still feared for the young actress’s safety.