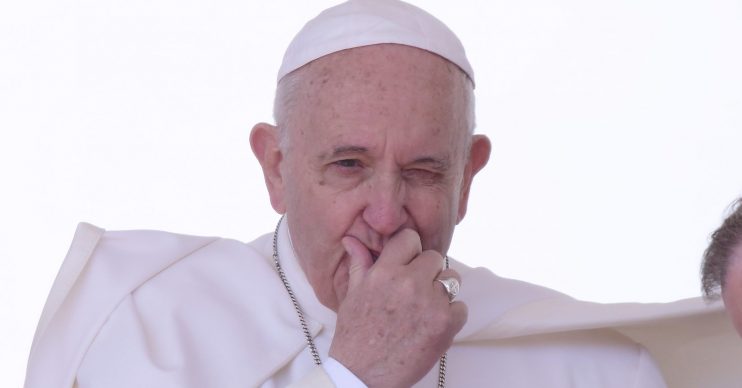 Pope Francis has been tested for coronavirus after falling ill as Italy struggles to contain an outbreak of the deadly bug.

The leader of the Catholic Church, 83, was forced to pull out of several events last week when he became ill after meeting with worshippers gathered in St. Peter’s Square, Vatican City.

The pontiff was due to attend a Lent retreat, the Metro reported, but did not go – a first in his seven years as pope.

According to the publication, he was tested for the flu-like Covid-19 and the results came back negative.

A number of towns in northern Italy are in the grip of coronavirus, with a number of flights to the region cancelled in recent weeks.

Here in the UK, several dozen people have contracted the disease and one person – a passenger aboard the Diamond Princess cruise ship – has died.

We must not forget what we can all do to fight this virus.

In a speech at Downing Street aired on ITV’s This Morning, the PM explained that authorities would be focusing on containing, delaying, researching and mitigating the impact of the bug, which is understood to have originated in the Chinese city of Wuhan.

He explained: “For the overwhelming majority of people who contract the virus, this will be a mild disease from which they will speedily and fully recover, as we’ve already seen.

“But I fully understand public concern, your concern, about the global spread of the virus. And it is highly likely that we will see a growing number of UK cases.”

Speaking further, Boris insisted the Government is committed to “doing everything possible” and offered up some simple advice people can follow every day to help stop the coronavirus situation from worsening.

He said: “Keeping the country safe is the Government’s overriding priority and our plan means we’re committed to doing everything possible, based on the advice of our world-leading scientific experts, to prepare for all eventualities.

“We must not forget what we can all do to fight this virus, which is to wash our hands with soap and water and, forgive me for repeating this, but… wash your hands with soap and hot water for the length of time it takes to sing Happy Birthday twice. It’s simple advice but it’s the single most important thing we can do.”