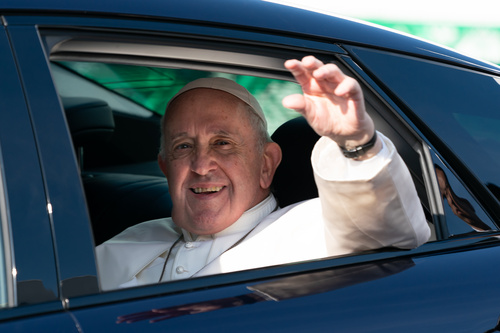 Pope Francis cancels engagements due to ‘cold’ – in coronavirus-hit Italy

Third day in a row for the 83-year-old

For the third day in a row, Pope Francis has cancelled official engagements as he reportedly suffers from a cold.

This is the most engagements he has ever cancelled in seven years of his papacy. It comes at a time when the coronavirus is raging in northern Italy.

He is continuing to work from his residence at the Vatican’s Santa Marta hotel and is receiving people in private, the Vatican press office said.

He held private meetings today with the head of the Vatican’s bishops’ office, Francis’s ambassadors to Lebanon and France, and a Ukrainian archbishop, according to the Daily Mail.

Pope Francis’ last public appearance was on Wednesday, where he was seen blowing his nose and coughing into a tissue. That was during an Ash Wednesday Mass – with the Mass planned for the following day swiftly cancelled.

On Sunday, he is supposed to travel to the Roman countryside for a week of spiritual exercises to herald the start of Lent.

The Vatican has not revealed the nature of Pope Francis’ illness. The official spokesperson would only say he has “a slight indisposition”.

But coronavirus has hit Italy hard, with about 800 people infected, most of them in the north. More than 84,000 people worldwide have contracted the illness, which started in China, with deaths exceeding 2,800.

On Friday, a British man became the first UK citizen to die from coronavirus after being infected on the Diamond Princess cruise ship quarantined in Japan.

What do you think of this story? Add your comments on our Facebook page @EntertainmentDailyfix