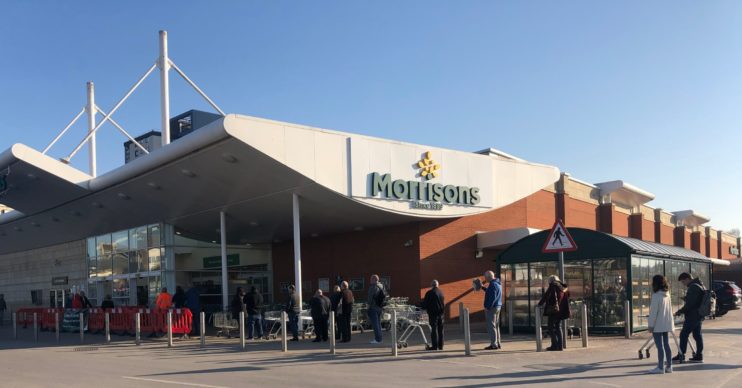 Police inquiries are ongoing after Morrisons staff were threatened by a man brandishing a weapon.

The incident took place in Burntwood, Staffordshire, on Sunday (April 26) and it was all caught on camera.

In the footage circulating on social media, the man is seen shouting and swearing at staff outside the store.

The row allegedly started after he was caught trying to use “fake vouchers” to pay for his shopping.

Although the video shows the man outside the store, the Daily Mail reports things kicked off inside first.

“Hope you die of coronavirus”

A witness revealed: “It was disgusting. He shouted at the cashier, who wouldn’t allow him to use the vouchers: ‘I hope you f*****g get coronavirus and die you c***.'”

Additionally, in the shocking video, the man is seen outside the store brandishing a baton-style weapon.

He is seen holding it above his head as he walks towards Morrisons staff outside the store.

A staff member is seen confronting the thug, however, he is pulled back by his colleagues.

“He also ran up to the security man and said: ‘I’ll f*****g blow you up.’ He was shouting loads more profanities. He completely lost it,” said the witness.

The altercation was caught on camera by someone who appeared to be waiting to head into the store to do their shopping.

They can be heard saying: “Oh my days,” as the row erupted.

He also ran up to the security man and was shouting loads more profanities.

In addition, a Morrisons rep also claimed the incident began after the man was confronted for trying to use fraudulent vouchers.

While it isn’t know what happened after the footage ends, however, the violence is understood to have escalated and police were called.

As a result, officers have spoken to the man in the video.

A Staffordshire Police rep confirmed: “We are aware of footage of an incident that took place at Morrisons in Burntwood at 3.30pm on April 26 being shared on social media.”

They added: “We want to reassure members of the public that we are speaking to a man from the local area in connection with this incident and enquiries are ongoing.”

Supermarket staff are considered key workers during the pandemic, with staff working hard to feed the nation.