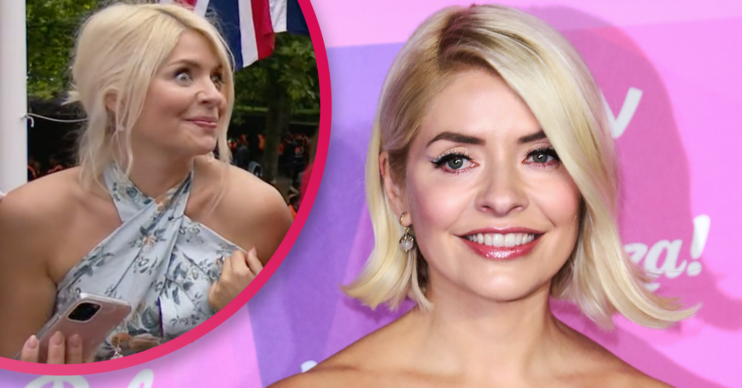 She was joined by Rylan and Nicole Scherzinger

The Platinum Jubilee parade took place in London yesterday (June 5), with a host of national treasures joining the pageant on open-top buses.

This Morning host Holly Willoughby was just one of the famous faces on board the buses.

And, naturally given that she was taking part in a once-in-a-lifetime event, Holly wanted to take a selfie or two to remember the moment.

Except the star’s Instagram followers spotted what they called “bad vibes” coming from the star as she posed atop the bus.

Holy uploaded a series of pictures of the day and branded it the “day of dreams”.

She shared: “Day of dreams…. Happy Happy Platinum Jubilee your Majesty… we LOVE you.”

Holly uploaded a series of selfies, including one of herself with Buckingham Palace as the backdrop and one with TV’s Rylan Clark.

‘It gave off bad vibes’

And, they say when AJ snuck in behind Holly as she grabbed Nicole Scherzinger for an interview, Holly was seen “rolling her eyes”.

“Missed the eye rolling when the reporter came to you whilst you were trying to take selfies hmmm,” said one.

I spotted that too, didn’t like that to be honest – it gave off bad vibes.

“I spotted that too,” said another.

A third alleged: “I spotted that too, didn’t like that to be honest – it gave off bad vibes.”

Another commented: “I saw it too! Didn’t give a good impression.”

However, fans did rush to defend Holly and said they’d have done exactly the same as the This Morning host.

“Capturing the moment and history… I would have done the same,” said one.

“National treasure!” declared another. “Holly is such a gorgeous human,” they added.

Others commented about Holly’s gorgeous floral dress, begging the star to reveal where it was from.

“I need to know where your outfit is from,” declared one.

Well wonder no more, because we’ve got all the details for you.

Sadly it’ll be way out of most Brits’ budget, as it retails for a whopping £695!

It’s currently available online in sizes 12 to 16, should you be feeling flush.