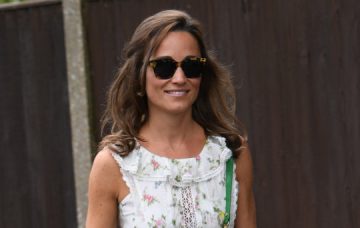 She announced her first pregnancy back in June

The Duchess of Cambridge’s pregnant younger sister Pippa Matthews (née Middleton) looked radiant as she stepped out in London this week.

The 35-year-old is expecting her first child with husband James Matthews in the coming weeks.

Pippa was snapped leaving a gym in London looking fabulous in a navy blue coat and printed dress, teamed with sunglasses and a chic grey handbag.

The author has been keeping active throughout her pregnancy and is often seen leaving her gym or cycling the streets of London.

Pippa announced her pregnancy in June, breaking the news in her Waitrose magazine column.

She’s since published several columns speaking about how she’s kept fit during pregnancy.

“Sport and exercise has always formed part of my daily life, from gym sessions to weekend runs, ambles or training for an event,” she wrote.

“Fitness gives me energy and helps clear my mind. I love the endorphins and the buzz factor that exercise gives.

“When I learned the happy news that I was pregnant I realised I needed to adjust my normal 4 to 5-day-a-week routine and find a way of continuing my exercise safely throughout the three trimesters.”

Pippa, who became a household name after serving as Kate’s bridesmaid during the Royal Wedding in 2011, married hedge fund manager James last year.

He’s the elder brother of Made In Chelsea star Spencer Matthews.

Spencer has just welcomed a child himself, after wife Vogue Williams gave birth to their son, Theodore.

Selfie in the lift with my wifey?? Absolutely

Spencer has always declined to speak about his brother and Pippa’s pregnancy in public, pointing out they are a very private couple.

However, he did tell Hello! Magazine recently he is pleased his son will grow up with a cousin around the same age.

“They’ll be fantastic parents and we’ll all be very close,” he said. “It’s nice our children will be of a similar age and we hope they’ll be close as they grow up.”

Pippa will also be able to turn to big sister Kate for parenting advice.

The Duchess of Cambridge is mum to son George, five, daughter Charlotte, three, and baby Louis, who was born in April.

Did you continue exercising during pregnancy? Leave us a comment on our Facebook page @EntertainmentDailyFix and let us know!