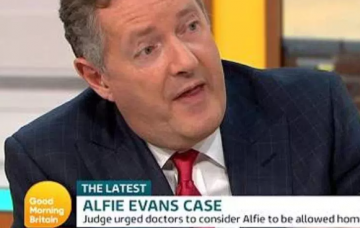 Alfie Evans has died in hospital overnight, his devastated father has announced.

Tom Evans said that his “gladiator” had “gained his wings”. He added: “My gladiator lay down his shield and gained his wings at 2.30am. Absolutely heartbroken. I LOVE YOU MY GUY.”

Earlier this week, Tom and Alfie’s mum Kate James lost their final battle in court to prevent doctors from turning their son’s life support machine off.

On Tuesday, a judge ruled that the 23-month-old would not be allowed to go to Italy for further treatment – but urged doctors to consider allowing him to go home.

The young couple appealed against the judgment, but it was again rejected.

The little boy was born with a degenerative brain condition and had been in a semi-vegetative state since December 2016.

He was first admitted to Alder Hey Children’s Hospital in Liverpool after suffering seizures, and had been a patient there ever since.

The toddler’s mum and dad wanted to fly him to Italy, where had had been granted citizenship, for further treatment, but this was rejected by doctors who said continuing treatment was “not in Alfie’s best interests”.

Discussing Alfie’s case on Good Morning Britain this Wednesday, news anchor Piers Morgan defended Alfie’s parents’ fight, saying: “There comes a point where obviously this boy is going to die. This is the tragic reality of the situation.

“At that point, is it not the humane thing, at the very least, to let these parents take this little boy home and let him die in their arms at home?

“If it had been my child ultimately in this situation, I would want to have the final say, and I would be very angry that the state appears to be conspiring against that.”

Piers tweeted his sympathies as he woke up to the news.

RIP Alfie Evans.
My deepest condolences to his parents, who fought so hard for their brave little boy. pic.twitter.com/pKfup3J7bX