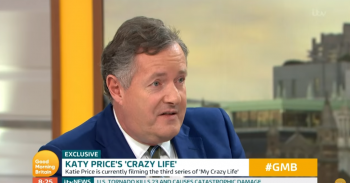 Piers Morgan has admitted he has a “soft spot” for Katie Price because she’s such a “loving and caring mother” to her son Harvey.

The Good Morning Britain host said he got a glimpse of what it is like for her to look after the teenager, who has Prader-Willi syndrome, when she appeared on the show last week and he saw them together in her dressing room.

Writing in his column for the Mail On Sunday’s Event magazine, he said: “As she tried to give him his medicine, Harvey – who’s also a very sweet, intelligent and funny boy – violently smashed his head back into a wall, shouted and aggressively brushed her away.

“Katie laughed it off, but as a parent of four kids, I found it genuinely shocking.

“And, what’s more, she has to cope with this alone because Harvey’s father, millionaire former Manchester United star Dwight Yorke, has had nothing to do with him.”

He added: “Whatever you think of Katie Price, she’s a loving and caring mother to her son, and that’s why I excuse her occasional crazy antics.”

Those “crazy antics” have recently included the glamour model being found guilty of being in charge of a vehicle while drunk, and facing criticism for using her children to advertise products after she faced bankruptcy.

She recently revealed that Harvey’s disability makes him like a”nightmare newborn” and she will soon have to send him to part-time residential care as she can no longer look after him full-time alone, as on some days he refuses to go to school.

Katie spoke about the challenges Harvey poses as she appeared on GMB, but said she’s always proud of him. She also took the opportunity to slam Peter Andre for not allowing their children, Junior and Princess, to appear on the third series of her reality show, My Crazy Life.

The 40-year-old is also mum to Jett and Bunny with Kieran Hayler.

The star recently jetted off for a holiday with her latest love, Kris Boyson.

Meanwhile, Piers also used his latest column to blast comedian Steve Coogan for trying to satirise him in his latest Alan Partridge comedy This Time.

The show has has not been well-reviewed with many finding the jokes are falling flat.

Piers gloated: “Oh, Steve. In your desperation to embarrass me, you’ve committed comedy homicide and murdered Alan Partridge as a laugh-out-loud character.”

Do you agree with Piers’ comments on Katie Price and Steve Coogan? Leave us a comment on our Facebook page @EntertainmentDailyFix and let us know what you think!