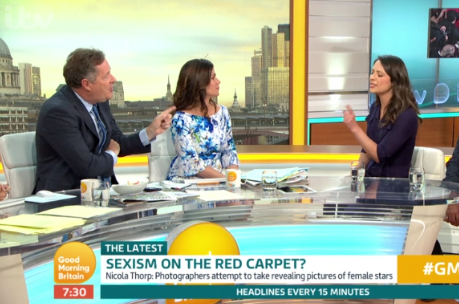 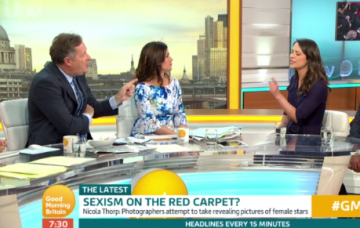 Host had a heated debate with Nicola Thorp

Nicola, who plays Nicola Rubinstein on Corrie, claimed it wasn’t fair that women are criticised and sexualised for what they wear to attend showbiz events, with prevalent comments such as “flashing the flesh” and “flaunting their cleavage”.

“I do not wish for women as a whole to be spoken about in that way when men go on and it just says ‘wore a suit’,” she said of articles about award ceremonies.

But Piers fiercely disagreed and shouted over her to say: “That’s not true, though. If a man turns up on a red carpet looking ridiculous or a bit fatter than normal or his hair had gone, he’d get exactly the same treatment – I have had it myself.

“I just don’t buy into this ‘it’s only women’. And the most bitchy about women at awards ceremonies tends to be other women.”

Nicola replied: “I am not attacking men here, I am attacking the sexism which is within the media.”

Piers pointed out that Nicola had chosen to wear a white dress “with the middle bit missing” that was “quite a revealing little number” when she recently attended the British Soap Awards.

“Presumably you have worn that so people notice and take pictures? Why else are you on a red carpet?” Piers asked her.

He suggested she shouldn’t have worn such a garment if she was then going to complain about write-ups regarding her “busty display”.

Nicola replied that she didn’t think her dress was showing her chest, and she was there because she had been nominated as Best Newcomer.

Nicola added that she wasn’t happy that what she wore was commented upon, while the men in attendance were overlooked.

Piers pointed out that men can also get sexualised – citing Daniel Craig and Poldark’s Aidan Turner as examples.

Nicola said the difference is it is “constant” for women.

“Let Nicola finish!” Susanna Reid reprimanded her co-host in the hope of restoring some order.

“I am allowed to get involved in the conversation!” Piers argued.

He later told Nicola he believes people should have the right to say what they think without being censored by celebrities, because that’s what having freedom of speech is all about.

As the pair continued to clash, with Susanna attempting to intervene, news reader Charlotte Hawkins had to cut in in the end to go to a competition.

Following the debate, Nicola tweeted to say: “Thanks @GMB for having me on to debate sexism in the media. It would be great to come back and actually debate it sometime @piersmorgan.”

The host replied and retweeted with a winking face emoji: “No problem. Get a good argument and we’ll have you back.”

The pair continued to exchange tweets about their differing points of view during the morning.

Nicola again clarified she was happy to have her picture taken on the red carpet but she wasn’t happy about “sexism” in reporting said events.

She tweeted: “This isn’t even a debate. It’s a fact. Sexism exists in red carpet reporting. And on Twitter.”

Piers replied: “Most of which is written/said by other women…”

“Come on, Piers…you’re an [bleep] but you’re not stupid. This isn’t about men v women. It’s about sexism in the press v equality.”

Nicola tweeted in regards to her outfit: “First time I had been on a red carpet. I thought I looked nice. Didn’t ask for any of it. Just had my photo taken on my way to an awards ceremony.

“If someone wants to comment objectively then fine. It’s the sexist and degrading comments that need to be highlighted and addressed.”

Piers then commented: “This is about hypocrisy: you want the right to strut your stuff on red carpets to promote yourself & get media coverage – but the media isn’t allowed to be anything but positive about you.

“I’m afraid that’s not how it works.”

He also tweeted: “If you go onto a red carpet, you WANT publicity/reaction. That’s literally the whole point of the damn things. So bored of celebrities using the media then abusing them.”

Nicola replied: “I don’t care about receiving negative comments. I wouldn’t have spoken to you if I did. I care about women receiving degrading and derogatory sexist remarks on their appearance regardless of what they are wearing in any walk of life. I want media coverage. Against sexism.”

The actress made her points in a recent column for the Metro.

She wrote about how she believes the reporting of how women look on the red carpet is sexist, as they are described as “flashing the flesh”, “flaunting their cleavage” and wearing a “revealing number”, while men simply “wore a suit”.

At the recent British Soap Awards, where she wore the white dress Piers mentioned with a cut-out section from her neck to her navel, Nicola said she struggled against the “‘nip-slip’ hungry photographers”.

She writes: “I was followed to my car by a photographer who tried his damn best to get a photo of my nipples as I was putting on my seatbelt. And he would have succeeded if it wasn’t for the nipple covers I had bought the day before after an anxiety dream.

“Upon returning to our hotel for the evening, another photographer tried to get photos down my top as I stepped out of my taxi. My 59-year-old father and a male colleague of mine had no choice but to act as human shields. This is not a position a modern feminist wants to find herself in, trust me.”

Nicola isn’t the only star Piers has publicly clashed with recently. He’s been branded a “bully” by Lily Allen on Sunday Brunch after they’ve had a numerous spats on Twitter.

Do you agree with Nicola on how women are portrayed on the red carpet? Leave us a comment on our Facebook page @EntertainmentDailyFix and let us know what you think! 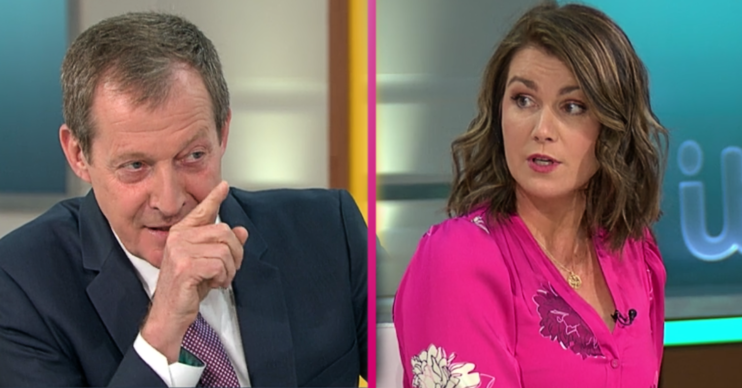