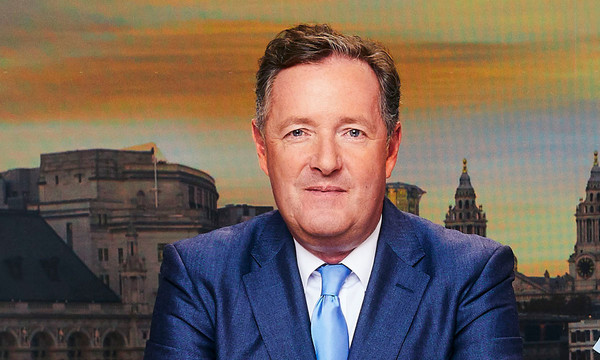 Would you vote for him?

Tomorrow is a huge day for Britain, with the current Prime Minister Boris Johnson going up against Labour’s Jeremy Corbyn and Liberal Democrats’ Jo Swinson in the General Election.

But some Brits don’t want any of the options available – and would prefer Good Morning Britain presenter Piers Morgan as the next PM!

In a poll conducted by ED!, more than half of  the 4,500 respondents said that Piers would make a better leader than any of the current General Election candidates in tomorrow’s election (December 12).

Piers would be the people’s knight in shining armour. 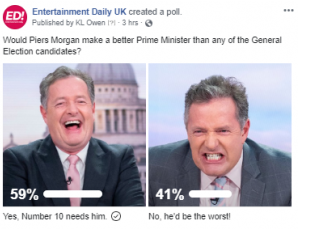 Another added: “Yes, Piers doesn’t stand any messing about and is truthful. Wouldn’t do any worse than some we have had in the past.”

A third said: “Wish we could have someone like Piers leading us. Who’s not afraid to ask questions.”

“At least when asked a question he answers!! Unlike some who keep beating around the bush,” agreed one more, while another said: “Definitely, get him in number 10, can’t do any worse than the muppet there already.”

However, some weren’t convinced, with one saying: “Definitely not, what a horrible man. People only watch him because he is rude and very opinionated.”

Another said: “God no, all he cares about is himself. That would be the worst thing they could do to us all. Him and Trump would be up each other [bleeps].”

“Couldn’t think of any one worse. Obnoxious and doesn’t listen to any one,” fumed another.

Others didn’t see the funny side, and said that the state of British politics was no laughing matter!

This morning (December 11), the Prime Minister went to extraordinary lengths to avoid Good Morning Britain’s Piers Morgan – he hid in a FRIDGE while a GMB reporter tried to ask him some questions.

Furthermore, Mr Johnson’s media minder said to reporter Jonathan Swain ‘for [bleep’s] sake’ as he tried to get a word with the PM.

After promising to appear on GMB the PM hasn’t yet faced one of Piers and Susanna’s trademark grillings, so Jonathan went to try and capture him on camera.

“Morning Prime Minister,” he said as Mr Johnson got out of a car. “Will you come on Good Morning Britain? Will you deliver on your promise to speak to Piers and Susanna?”

It was then that press secretary Robert Oxley stepped in and herded Jonathan out of the way,  muttering “for [bleep’s] sake”.

Back in the studio, Piers and Susanna could hardly believe what they had heard.

The incident saw a rash of viewers – who had produced hilarious memes – take to Twitter to satirise the stand-off.

Would you vote Piers Morgan for PM? Leave us a comment on our Facebook page @EntertainmentDailyFix and let us know what you think!