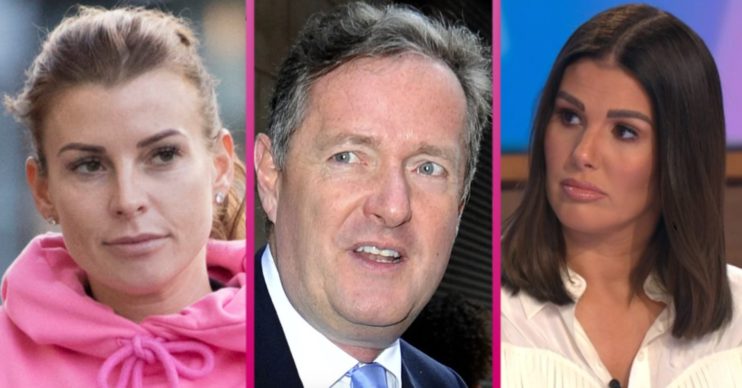 Reckons secrets could be "spilled out" in court

Piers Morgan has warned Coleen Rooney and Rebekah Vardy that secrets could be “spilled out” in their court battle.

The 55-year-old presenter, who is pals with both WAGs and their footballing other halves, admitted he found the situation between them “sad”.

But it seems Piers is stuck in the middle of his two groups of pals.

He looks to be concerned that legal proceedings could impact both parties badly.

It’s sad that it’s come to this where they’re at such loggerheads.

And it appears Piers reckons having both stars’ private lives raked over in court could blow up in their faces.

Reflecting on the clash between his friends, Piers told The Sun it was tough to see happen.

Nonetheless, he also hinted he thought that Rebekah may be innocent of the accusations made against her.

Piers also claimed Rebekah has given him a personal assurance.

He said: “It’s sad that it’s come to this where they’re at such loggerheads. But you know, Rebecca was very convincing this stuff had nothing to do with her.

“She was adamant to me about it. I’m just trying to stay out of it, I just don’t take sides.”

Piers also noted he would never cut off a friend or group of friends because of such a falling out between two different people.

However, even though he doesn’t want to take sides, it seems Piers can’t resist the tussle, describing witnessing the spat as “fascinating”.

Piers added: “If they actually go to court then I can’t imagine what’s going to come out – it’s complete madness, because all your life gets spilled out.”

Last month, it was reported that Coleen is ‘not worried at all’ by the legal moves back and forth to sue her for libel.

Coleen reportedly thinks Rebekah is trying to speed up proceeding to avoid truths about herself being unearthed.

A source told The Sun: “Coleen remains confident that she has an extremely strong case.”

They added: “Her lawyers specialise in investigative law and they are going through every form of communication between the two and between Becky and others since before Coleen started planting Instagram stories.”