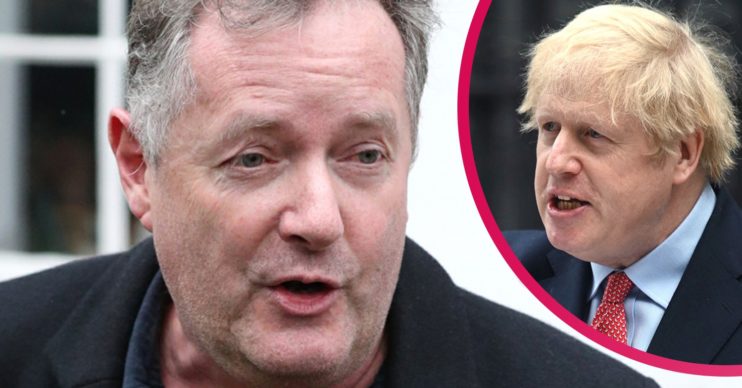 Piers Morgan has said Boris Johnson should resign if a recent damning report against the Prime Minister turns out to be true.

The former Good Morning Britain host, 56, unleashed his fury against the PM, 56, on Twitter.

The star reacted to an alleged quote by Boris as claimed by an anonymous source.

Sharing a headline from the Daily Mail, Piers declared: “If this disgusting quote is true, then Boris Johnson must resign.”

What is Boris Johnson accused of saying?

The shocking headline reads: “Boris: ‘Let the bodies pile high in their thousands.'”

The report claims Boris made this comment during a debate over lockdowns.

However, Defence Secretary Ben Wallace has flatly denied that the PM ever uttered these words, as has the man himself.

He told Sky News: “It’s not true – it’s been categorically denied by practically everyone.

“We’re getting into the sort of comedy chapter now of these gossip stories.
“You know – unnamed sources by unnamed advisers talking about unnamed events. You know – look – none of this is serious.”

This all comes amid a stunning war of words between Downing Street and former Chief Advisor to Boris, Dominic Cummings.

What has Dominic Cummings said?

Dominic has denied he has leaked information to the press.

In a lengthy blog post, he outlined all of the allegations against him, and stated his case for each.

Dominic writes: “I told him I thought his plans to have donors secretly pay for the renovation were unethical, foolish, possibly illegal and almost certainly broke the rules on proper disclosure of political donations if conducted in the way he intended. I refused to help him organise these payments.”

However, Piers’ fans seem divided on whether the Prime Minister would have made such an insensitive and inflammatory remark.

One user claimed: “I cannot believe for one moment that Boris Johnson said this. Especially after being seriously ill himself with COVID.”

Another user replied with: “I know Boris can be an idiot at times but I can’t believe he actually said this. If it was true it would have surfaced long before now.”

But an additional user argued: “I have no problem believing Boris said this. He fears his rabid, foaming back benchers far more than the British public.”

A further user stated: “Boris, is completely void of integrity and this country deserves better.”