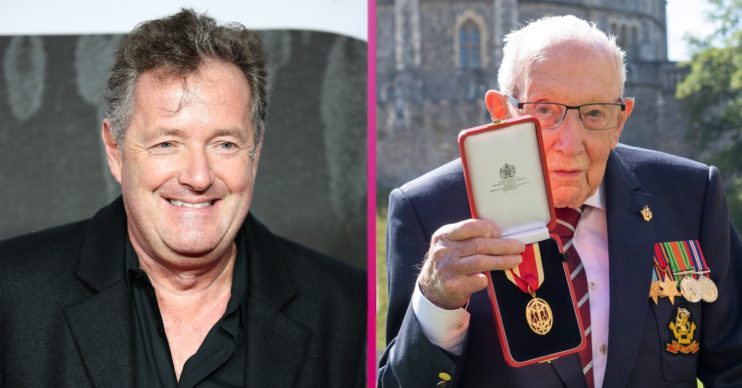 Piers will interview Sir Tom for an upcoming ITV special

The WWII veteran, 100, has become a household name after he raised over £32 million for the NHS amid the coronavirus pandemic.

And Piers, 55, is definitely a huge fan of the British hero.

Taking to Instagram, The GMB star shared the good news.

Piers wrote: “BREAKING: I’m beyond thrilled to announce that the magnificent Captain, Sir Tom Moore will be my guest on Life Stories in a special edition of the show to be aired next month.

“What a life, what a man! So looking forward to our chat Captain Tom!”

Read more: Piers Morgan defends The Queen after she is branded an ‘old broad’

A second user gushed: “Fabulous news, you’ll surely need extra time for this interview, I imagine you’ll have so many questions for this remarkable man. Look forward to watching this.”

And a third user praised: “Cannot wait. What an absolute legend.”

Sir Tom has become a shining star during the coronavirus pandemic.

And he was even knighted by the Queen.

He attended the knighting ceremony at Windsor Castle with his family.

In addition, he said at the time: “It was an absolutely outstanding day.

BREAKING: I'm beyond thrilled to announce that the magnificent Captain, Sir Tom Moore will be my guest on Life Stories in a special edition of the show to be aired next month. What a life, what a man! So looking forward to our chat Captain Tom!

“I am absolutely overawed

“This is such a high award and to get it from Her Majesty as well – what more can anyone wish for? This has been an absolutely magnificent day for me.”

Meanwhile, Piers donated £10,000 to Captain Tom’s NHS appeal. And a TV insider told The Sun just how much he means to him:

“Like the rest of the nation, Piers was in awe of Sir Tom’s fundraising.

“The campaign really took off after Tom appeared on Good Morning Britain, so Piers feels great pride in what Tom achieved.

“In the dark days of lockdown, it was everyday heroes, not celebs, who brought joy to the nation.”

Meanwhile, during Sir Tom’s appearance on GMB he won the nation’s hearts with his gratitude and patriotism.

He said: “Thank you very very much, it just shows what a marvellous country we are, made up of so many magnificent people who are still keeping up their spirits however difficult it may be.

“But at the end of the day we are all going to win through. It may be a bit difficult, it may take time, but we will win through in the end.”