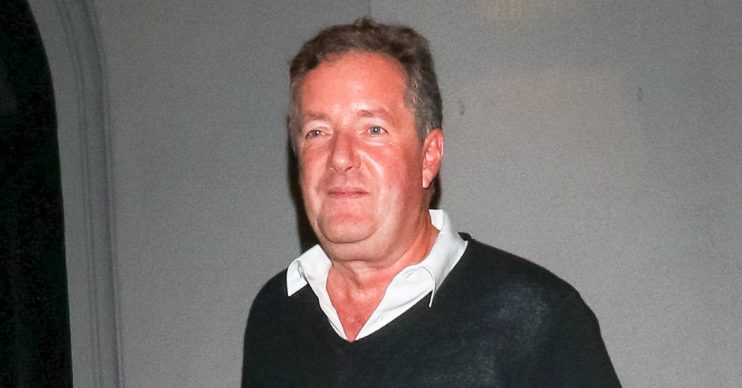 TV presenter Piers Morgan has threatened to deprive one of his sons of his inheritance after he joked about burning his dad’s prized portrait on social media.

Spencer Morgan, 26, took issue after the Good Morning Britain host put a painting of himself up in the hall of the family home.

Gone back home and @piersmorgan has put this up in the hall. Big bonfire tonight pic.twitter.com/qzkSnv7B1S

Taking to Twitter, Spencer triggered a hilarious war of words by sharing a snap of the portrait and telling his 29.2k followers it might be time to have a “big bonfire”.

Piers is obviously proud of the painting, which shows him looking serious in a blue suit and red tie against a gloomy background.

He retweeted Spencer’s post for his own substantial follower base and warned his son that he might find himself without a penny of his old man’s money if he’s not careful.

Piers fired back: “Any more of this impertinence and the only thing you’ll be burning is your inheritance.” 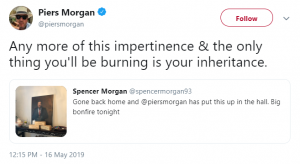 Potentially digging himself an even deeper hole, Spencer went on to quip: “You did that already when you bought this monstrosity.”

Piers’ fans could see the funny side of the exchange, with one urging him, “Give it to army troops for shooting practice” and another chiming in, “Nice dartboard that”.

Someone else joked, “I’d stick that on the front door at Halloween” while another tweeted, “Well, it’ll keep the burglars away!!!”

It’s not the first time Spencer has poked fun at his famous dad on social media.

When the controversial GMB host turned 54 earlier this year, he took the opportunity to mock his old man’s looks.

Spencer posted a selfie of the two of them in their sunnies to mark Piers’ birthday in March.

But instead of showering his dad with love and praise as any parent would expect, he cheekily captioned the photo: “Happy birthday old boy, if I look like you at the age of 54… I’ll be fuming.”

Piers, who must be used to taking stick from his four children, took the comment in his stride by replying with a quote from the late actor Robin Williams: “Never pick a fight with an ugly person, they’ve got nothing to lose.”