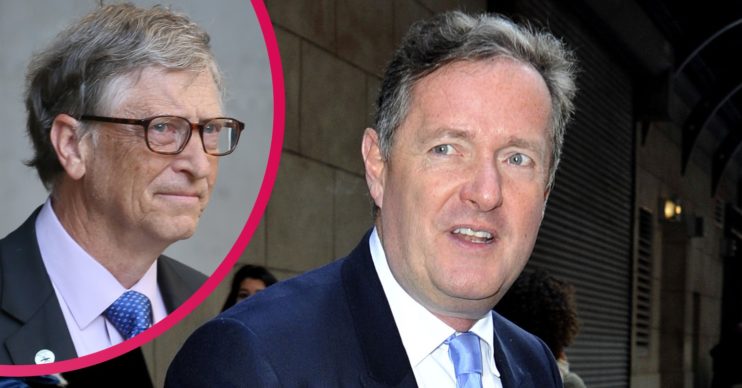 The GMB host clapped back with a sarcastic quip

Piers Morgan has slammed a vaccine conspiracy on social media, branding a troll an ‘idiot’.

The GMB presenter has been optimistic about the roll-out of the first coronavirus jabs. Like many, he is hopeful it’s the start of life returning to normal.

What did Piers Morgan say about the vaccine conspiracy?

Piers hit back at a Twitter user with a sarcastic quip before branding them a “village idiot”.

Earlier this week, billionaire Bill Gates spoke at the World Congress of Science & Factual Producers, where he expressed alarm over the vaccine conspiracy theories doing the rounds online.

He said at the event: “I’m surprised at all the conspiracy theories — people who think the vaccine is not meant to save lives.

“That’s all wrong, but the scale of it is a bit scary in terms of, will that prevent people from being willing to take the vaccine, and why are they looking for these simple explanations?”

Turn you into a village idiot… and it’s clearly working!

On Twitter, a troll suggested that Piers had received cash from Bill Gates. They appeared to claim it was so he would encourage everyone to get the jab.

They wrote: “@piersmorgan how much of that Gates money you received…”

Piers clapped back: “Hi Wayne, yes, @BillGates paid me $1billion to big up the vaccines so that we could implant a chip inside you, control your brain, and turn you into a village idiot.

Hi Wayne, yes, @BillGates paid me $1 billion to big up the vaccines so that we could implant a chip inside you, control your brain, & turn you into a village idiot. And it's clearly working! https://t.co/ipROKZViA9

The host got into a heated discussion with the Cabinet minister as the politician denied the government had pursued a herd immunity strategy during the pandemic’s early stages.

Mr Gove claimed Piers was being “defensive”, while the presenter blasted the government over its coronavirus policies.

Further, Piers argued against the MP’s claims that Government “was never pursuing a policy of herd immunity”, bringing up comments from the UK’s Chief Scientific Adviser that suggested otherwise.