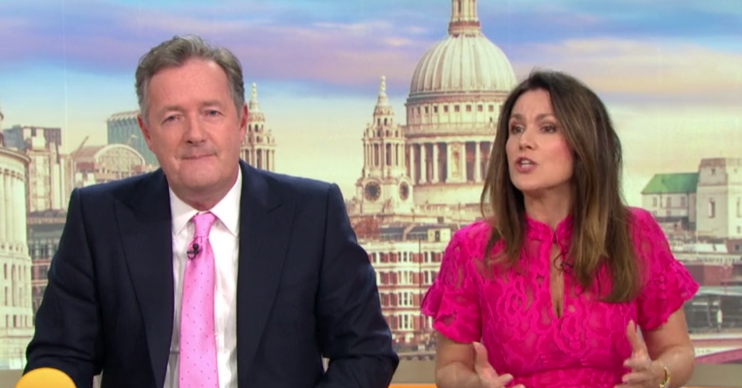 Breakfast telly presenters Piers Morgan and Susanna Reid laid into one another earlier today as they squabbled about ‘fat-shaming’.

Piers, 54, slammed his fellow Good Morning Britain host for her ‘hypocrisy’ after revisiting his row on Monday with Andi Peters which saw the ex newspaper editor teased over being a pie eater.

Biting his slap, Piers ranted at the time: “It triggers my anxiety, it’s wrong. It fills me with self-loathing.

“Everything about what you just did is offensive, wrong, and I really feel you should apologise.”

However, Wednesday’s programme saw Piers fume at Susanna after he claimed she hadn’t stood up for him during the back and forth bantering.

Reacting to Susanna telling him that “shaming anyone about anything isn’t very nice,” Piers appeared to lose his rag after she indicated he was getting a taste of his own medicine.

I don’t care what anybody says to me.

“You didn’t say that yesterday when Andi Peters was fat-shaming me,” Piers seethed.

Read more: Piers Morgan takes aim at Phillip Schofield and Holly Willoughby as This Morning is snubbed for award

As a confused Susanna asked whether he was looking for sympathy, Piers attempted to take the tension out of their conversation by suggesting he was joking.

But Susanna was not to be denied and pressed him for a further explanation of his muddled argument before he turned on her and claimed her ‘hypocrisy had been laid bare’.

He volleyed back: “When I was being fat-shammed, you revelled in it.

Piers continued: “You know what, when you’re fat, unless you’ve got a thyroid problem or a medical issue which makes you overweight… if you’re perfectly normal but you eat too much and you drink too much and you balloon in weight, actually you need somebody to say, ‘hey chunk, lose a bit’.”

But while Susanna rolled her eyes and concluded Piers’ words did not help any kind of relevant situation, Piers closed his eyes and groaned his frustration.

“It’s a joke Susanna,” he insisted.

“What I did do was brilliantly exposed your hypocrisy about this… which is you care about mental health until it’s mine.”

Despite his triumphant tone, viewers commenting on social media did not seem to think he had won the argument.

“Well done Susanna Reid for pulling Piers Morgan up over his latest hypocritical attempt to play victim,” one person wrote on Twitter.

Another tweeted: “Piers Morgan the hugely argumentative interviewer suddenly becomes sensitive. Give me a break. You give it out you take it back.”

And a third person added: “Susanna can’t believe Piers has the cheek to accuse you of not caring about his mental health! I worry just how much his constant bullying behaviour affects yours!!”