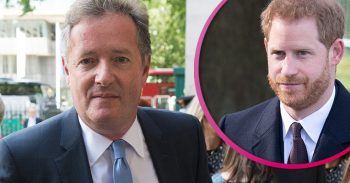 Piers Morgan has hit out at the Duke of Sussex for taking a private helicopter days before urging children to take action on climate change.

Harry, 34, is said to have taken a private chopper – which apparently cost £6,000 – from London to Birmingham as he carried out two royal engagements on Monday.

The Duke then stood on stage at Wembley Arena two days later and urged the crowd of 12,000 people to “wake up” to climate change.

Read more: GMB ‘taken off air’ as Piers Morgan lashes out at producers

While, of course, the flight would have saved him 40 minutes, the emissions are up to five-times higher than by train, according to the Mirror.

Taking to Twitter on Friday to criticise Harry, Piers called the Duke’s actions “beyond parody”.

He wrote: “Prince Harry using a private helicopter to go to Birmingham then lecturing us about climate change is beyond parody.

“Walk the walk, Your Royal Highness – or spare us the hectoring, hypocritical talk.”

Prince Harry using a private helicopter to go to Birmingham then lecturing us about climate change is beyond parody. Walk the walk, Your Royal Highness – or spare us the hectoring, hypocritical talk.

Many of Piers’ fans agreed with his statement as one person replied: “First time in my life I’ve agreed with Piers Morgan.”

Another said: “100% spot on there Piers,” while a third wrote: “Getting worried now. That’s FOUR times in a week I’ve agreed with Morgan.”

During his speech, Harry had told the crowds: “Climate change is a humanitarian issue and one where we’ve been far too slow in waking up to the issues and acting on the damaging impact our ways of living are having on the world.

“We now have the facts, the science, the technology and the ability to save not just our planet, but ourselves.”

The royal continued: “I know you don’t sit back and wait for solutions, you take action and create them.

“Our world’s greatest assets are threatened every day… every forest, every river, every ocean, every coastline, every insect, every wild animal. Every blade of grass, every ray of sun is crucial to our survival.”

A spokesperson for Friends of the Earth – an environmental campaigning community dedicated to the wellbeing and protection of the natural world – told the Mail Online: “Private air travel obviously comes with a huge carbon footprint.”

Kensington Palace has told The Sun: “Travel decisions are based on a number of factors, including effective use of time, security and minimising the impact on others, while ensuring the full schedule can be delivered.”