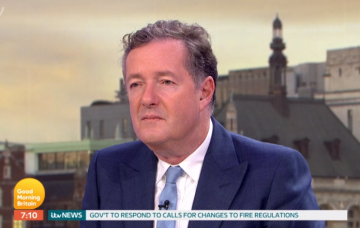 Piers Morgan slams GMB guest for “abusing everybody” on set

Piers Morgan had possibly his biggest showdown yet with a guest on today’s Good Morning Britain.

Drama ensued this Tuesday during a debate over an ad featuring a topless man for an over 50’s dating app, which has been banned after complaints.

The question “Can older men be objectified” was asked – and the chaos unfolded.

Guest Richard Holt began by arguing he doesn’t have a problem with men being objectified. But things soon turned sour, with Piers ordering him to “shut up” and stop “abusing everybody”.

When co-host Susanna Reid began by asking Richard if he was in his fifties, he was taken aback and responded: “I’m in my forties, thanks for asking.”

Richard then told fellow guest Harriet Minter, who was on the opposing side of the discussion: “Sorry, I lost the will to live while you were speaking.”

But when Richard turned his attention to Piers, 53, all hell broke loose.

As the GMB presenter tried to argue why he didn’t have a problem with the dating ad, Richard told him: “Piers, you’re shouting so much I now want to join Harriet’s side.”

Piers curtly told him to “Shut up!” and added: “I don’t think you were the best guest we could have booked for this. You’ve no idea what you’re doing, you’re abusing everybody, including the guest and the hosts.”

He also branded the model an “annoying little twerp”.

Viewers had a mixed reaction to the bust-up on social media.

While one viewer wrote: “Please get Richard Holt back on #GMB *so* much nicer to look at *and* listen to, than @piersmorgan #jealousmuch?”

Please get Richard Holt back on #GMB *so* much nicer to look at *and* listen to, than @piersmorgan #jealousmuch 😂

‘You annoying little twerp’ I do love @piersmorgan @GMB 🤣🤣

The awkward segment ended when Richard tried to talk again – and Piers completely shut him down.

Still reeling, Piers said later on in the show: “He’s the worst guest we’ve ever booked, ever, in the history of Good Morning Britain which is quite something given the horror stories we’ve had”.

That’s certainly a show we won’t be forgetting any time soon, Piers!

What do you think of the debate? Leave us a comment on our Facebook page @EntertainmentDailyFix and let us know what you think.