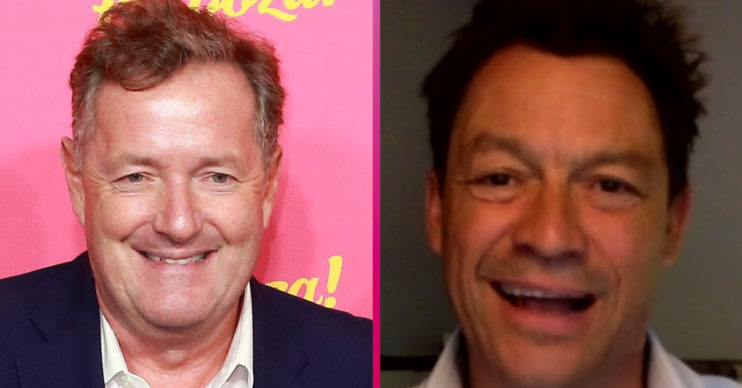 Piers had a right go at Dominic

Piers Morgan has slammed Dominic West after the actor said he “leapt with joy” when he heard Donald Trump had contracted coronavirus.

The GMB host, 55, took to Twitter to lambast Dominic, 50, and defend colleague Kate Garraway, whose husband is in hospital after battling the virus.

The Wire and Appropriate Adult actor appeared on GMB today (Friday October 2) to speak about the Prince’s Trust and the effect the virus has had on young people.

When asked by Kate, 53, about his views on Mr Trump and his coronavirus diagnosis, Dominic said he “did leap in the air with joy”.

It was then Piers flung himself into action.

“Imagine telling someone whose own husband is lying in a coma from coronavirus that you ‘jumped for joy’ when you heard others had caught the disease?” he said on Twitter.

What did Dominic West say about Donald Trump?

Dominic didn’t mince his words when he was asked by kate what thought about the President.

“Well I did slightly leap in the air with joy,” he said.

“He said ‘it is what it is’, and I think the phrase is ‘what goes around comes around’.

I think Trump is a catastrophe for America and the world.

“I just hope it doesn’t interfere with him being elected out of office that’s all.”

He added: “I think Trump is a catastrophe for America and the world.”

What else has Piers been saying?

Piers has had a busy morning bashing the Trump trolls.

After the president’s diagnosis was confirmed, he slammed those who celebrated the news.

Piers said: “Nobody’s been more critical of Trump over Covid than me.