Piers Morgan has give fans a rare glimpse of his daughter Elise after taking her to the bowling alley.

Good Morning Britain star Piers, 54, took a picture of his youngest child as she took aim at the pins, before comparing it to a photo of himself.

In his snap, Piers - who shares Elise with wife Celia Walden - is looking mighty pleased with himself after scoring a strike.

No better way to start the weekend than beating your highly competitive 7-year-old daughter at bowling. Next time, Elise... 👊😂

And he was quick to tell his 689,000 followers that he ended up beating seven-year-old Elise during their morning of father-daughter fun.

Writing on Instagram, Piers said: "No better way to start the weekend than beating your highly competitive 7-year-old daughter at bowling. Next time, Elise..."

Fans were quick to comment, with one writing: "Haha, Piers you look so happy to win!"

Another teased: "Wonder where she gets that from."

Backing Piers, a third even said: "I always tell my 8 year old son to 'take it on the chin' defeat is also a life lesson."

Last week, Piers - who also has three sons with his first wife - returned to the Good Morning Britain sofa alongside his co-host, Susanna Reid.

But during one live broadcast of the ITV breakfast show, he was slightly surprised to receive an email from Elise calling him a "pig".

While on air, Piers looked down at his phone and revealed: "I just got a lovely charming message from my seven-year-old daughter Elise, who watches the programme. Morning, Elise! 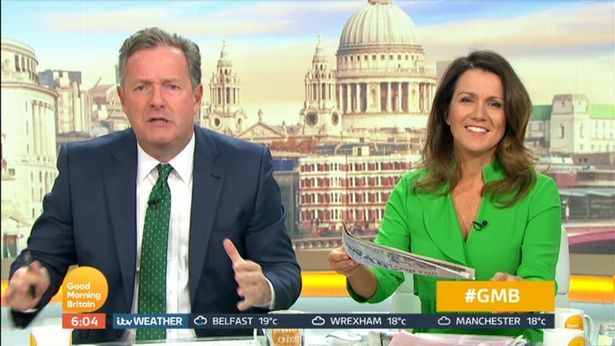 "She just sent me a lovely email saying, 'Hi Pig, you look terrible'."

Piers didn't look wildly impressed with his daughter's comments, yet Susanna and their crew members in the studio couldn't stop giggling.

If you're wondering why I'm like I am, it's because that's my home life.

Piers then said: "If you're wondering why I'm like I am, it's because that's my home life. That's my own daughter."

He then repeated the email she sent him, "Hi Pig, you look terrible," with a downcast face.

Piers finished off by looking directly into the camera and addressing his daughter, saying: "Elise, please, some respect."

Could his humble-bowling-brag be payback by any chance?!