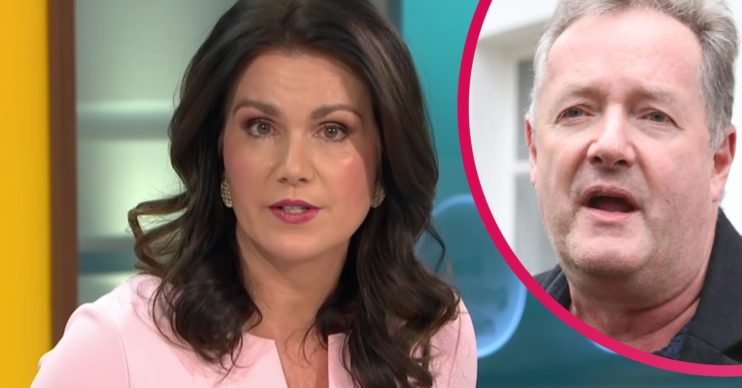 He spoke about his "good friend" on Fox Nation

Piers Morgan has claimed Susanna Reid was ‘in the grip of fear’ that a ‘mob’ would drive her off Good Morning Britain if she defended him.

In his tell-all interview this week (Monday, April 5) with presenter Tucker Carlson on the streaming service Fox Nation, the former GMB host said his “good friend” Susanna was fearful of what might happen if she said “nice things” about him.

What did Piers Morgan say about Susanna Reid?

He said in the chat: “Susanna, my co-host for five years, is a good friend of mine. Honestly I think she was in the grip of fear. I think she was fearful that if she went too far saying nice things about me, the same thing might happen to her.

“There would be a huge Twitter pile on, this is how it works. There was no real mainstream media interest in what I said.”

He added that a “very orchestrated mob” drove it all online.

Piers Morgan quit GMB after refusing to apologise for saying he didn’t believe anything Meghan Markle said in her interview with US host Oprah Winfrey – and clashing with weatherman Alex Beresford about it.

The broadcaster previously called Susanna’s behaviour following his exit “frosty” – and joked his ex wife speaks about him more fondly.

Friends, he said, feared he had “fallen out” with her after watching her address his exit.

There would be a huge Twitter pile on, this is how it works.

Susanna said on the programme: “Piers and I have disagreed on many things.

“He is without doubt an outspoken, challenging, opinionated, disruptive broadcaster. He has many critics, and he has many fans. You will know that I disagreed with him about Meghan’s interview.”

She continued: “He has been my presenting partner for more than five years. He has been a voice for many of you, and a voice that many of you have railed against.”

In his column for the Daily Mail, Piers quipped: “Jeez, even my real ex-wife talks more fondly about me than that (and, in fact, did so overnight in a very supportive message).”

He said he wondered if she felt “concerned for her own future” and “fearful of troll abuse” if she supported him.

In his column, Piers wrote: “She apologised for the tone of her chilly goodbye, which was for all the reasons I suspected.”

What do you think of Susanna Reid presenting GMB without Piers Morgan? Leave us a comment on our Facebook page @EntertainmentDailyFix and let us know.