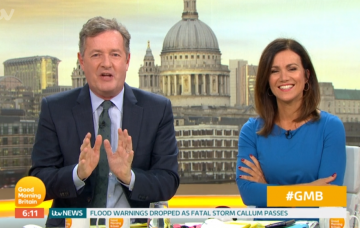 He joked about Seann and Katya's next move

Piers Morgan has reacted to Seann Walsh and Katya Jones being saved by Strictly Come Dancing fans at the weekend.

During Monday’s Good Morning Britain, Piers said the pair had “got away with it” after comedian Seann, who was in a long-term relationship, and married dancer Katya were caught kissing in the street after a night out.

Seann has since been dumped by his girlfriend, while Katya’s husband, Neil Jones, has not spoken publicly on the incident.

On Sunday evening, Seann and Katya made it through to week five of the competition and Piers suggested their kissing scandal may have helped boost their profiles and stop them from being voted off.

The presenter even jokingly admitted he hopes Seann and Katya “move to full sex” this week so “we can have a really good week”.

He said: “I’d never heard of Seann Walsh or Katya and I don’t know who [her husband] Neil is, but anyway they stayed in.

“Hopefully they’ll move to full sex now and we can have a really good week. I would if I was them, they’ve got away with it.

Piers added: “[Former Strictly judge] Arlene [Phillips] says they’re all at it, having sex like rabbits.

“Apparently the only two who never did was these three [Susanna Reid, Charlotte Hawkins and Richard Arnold].”

Piers went on to talk about Katya’s husband fellow Strictly dancer Neil, criticising him for “glaring” at Seann and Katya after their dance.

He said: “I’m sure he’s a lovely guy, but what’s he doing there like a big doormat, muppet.

“I don’t know who these people are, I don’t watch it, but what I love is it’s a warm, cuddly, lovely show, but the absolute bile that exploded when they stayed in.”

Seann and Katya were saved after performing their Charleston routine the previous night.

The dance partners were pictured kissing during a night out in London last weekend.

Comedian Seann was subsequently dumped by his girlfriend and they were calls from some viewers for Seann and Katya to be pulled out of the competition.

What did you think of Piers’ comments? Leave us a comment on our Facebook page @EntertainmentDailyFix and let us know what you think!