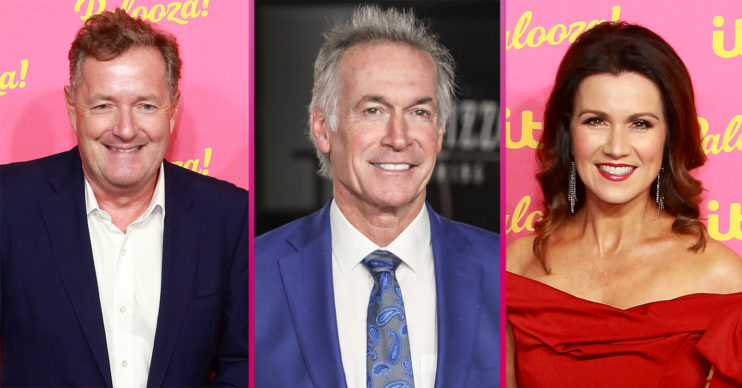 Too much cheese and wine!

Piers Morgan has had an indulgent summer it seems, and others have been quick to notice his ‘weight gain’.

It has not gone unnoticed, mostly by Good Morning Britain co-presenter Susanna Reid.

The 55-year-old has admitted he will be on a health kick after he was called names like “fatso”, “chubster” and “seven chins”.

In a recent Instagram snap, the presenter showed off his recent double page spread article in The Sun.

He captioned the snap: “My interview in The Sun today. Obviously, I will now be reporting Susanna to HR for fat-shaming me in the workplace…”

The picture showed a headline celebrating Piers’ outspoken nature and having opinions on everything.

Meanwhile, the outspoken journalist enjoyed a lengthy holiday in France over the summer, before having to return to the UK due to coronavirus restrictions.

Piers Morgan has been ‘scoffing too much cheese and wine’

On his French holiday with family, Piers admitted to indulging and scoffing too much cheese and wine.

In another recent interview with The Sun, he said: “During the summer, a lot of cheese went down my gullet, and it was a couple of bottles of white. Quite comfortably. Depending on the quality, and maybe a little more.”

He added: “I’m going to see a new personal trainer, and unfortunately Celia’s taken it all quite seriously, so suddenly it’s all the good stuff’s gone and all the kale’s come in and the quinoa and vegetables.

“A lot less Bordeaux – I’m down to one glass a night.”

Meanwhile, the presenter has been outspoken in recent weeks, even clashing with fellow ITV star Holly Willoughby.

The pair clashed as they were discussing the news that the famous family has announced the end of their hit TV series Keeping Up With The Kardashians.

Piers expressed his happiness that the show was ending, which caused Holly to say: “Why do you hate them? I have to say Piers you are particularly cruel.”

“I always think this, you are really, really mean because they are human, they are people with feelings.”

Piers said: “They are talentless wastrels who made billions by conning the world that there is something compelling about them.”