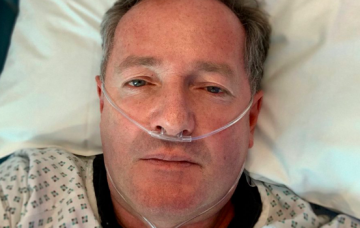 Piers Morgan has blamed his recent illness woes on a a gut-churning diet of a vegan sausage roll, Brexit and Donald Trump.

The Good Morning Britain co-host revealed yesterday he had been undergoing tests in hospital for an unspecified medical issue.

And this morning the 53-year-old told his 6.5 million Twitter followers he has been suffering with stomach conditions that have left him with “inflamed, exploding innards”.

Responding to an enquiry from a follower, Piers joked he had been left low after his GMB ‘vomiting’ stunt earlier in the week.

Piers tweeted: “If you really want to know, I was diagnosed with stomach gastritis and duodenitis.

He continued: “Monday, 6.40am: I eat one mouthful of vegan sausage roll.

“Friday, 11am: hospitalised for gastroscopy on inflamed, exploding innards.

Read more: Bruno Tonioli stuns fans with pics of himself in ‘budgie smugglers’

Despite many followers sending the breakfast TV wind up their best wishes for a swift recovery, not all of those contacting Piers on social media were sympathetic.

One respondent questioned why Piers had a “need” for sedatives, giving the former Mirror journalist the opportunity to describe the pain of the procedure.

“I’m told 70% of people who have a gastroscopy opt for a sedative, and the other 30% later wish they had,” he said.

Confirming he would be back on the box for GMB on Monday morning because he doesn’t “pull sickies”, Piers also took issue with a follower who tweeted their hopes he was making use of private healthcare.

He continued: “Though as a big (non-avoiding…) taxpayer in the UK, I would be perfectly entitled to use the NHS if I so wished.

“Or do you think otherwise?”

See you bright and early on Monday, Piers!