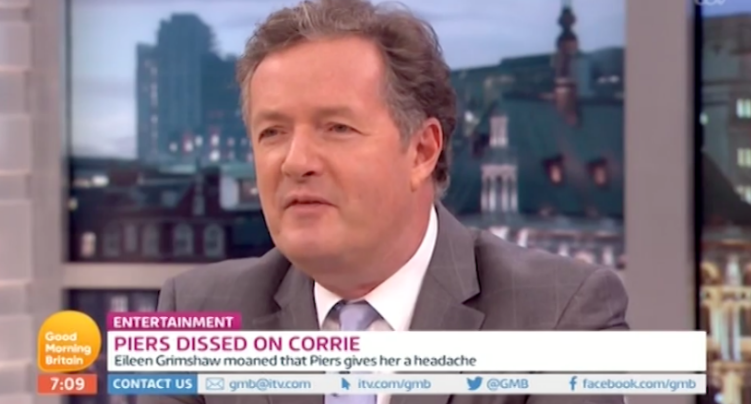 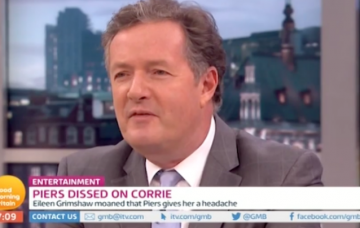 He knows who's to blame!

Piers Morgan has admitted he was stunned to hear himself getting dissed on last week’s Coronation Street – but now he’s worked out why he was bashed on the soap.

“I was watching Coronation Street last week and Eileen said this…” he said on today’s Good Morning Britain when Richard Arnold joined the studio to share his showbiz news round-up.

They then showed the offending clip from last week’s Corrie.

In it, Eileen Grimshaw can be seen applying her make-up as she talks to Seb and she then tells him she’s tired of all the noise as: “I get enough of a headache from Piers Morgan.”

With his arms folded in anger, Piers told his co-hosts Susanna Reid and Kate Garraway: “I couldn’t understand where this impromptu and unprovoked attack came from.”

Then turning to Richard he said: “Then a little part of my brain took me back to the actress who plays her – Sue Cleaver – and oh yes, that’s right – she is your best friend!”

Richard agreed that he has indeed been friends with the actress for 23 years but he’s just as angry as Piers that he got a mention on the show.

“Twenty-three years I have been carrying that woman, I’m furious I have never had a mention on the Cobbles!” he said.

“It’s one of my favourite shows of all time and you get the mention!”

Piers added that one member of his family would have been delighted and fuming in equal measure at his mention on the soap.

He explained: “My grandmother loved Coronation Street. She would have absolutely loved me being mentioned – and then when she’d have heard the mention, she would have come after you!”

The Piers insult delighted Corrie fans at the time it aired with some calling Eileen a “legend” on Twitter.

Read more: Not all viewers were impressed with Holly Willoughby’s DOI appearance

“Ha, even Eileen isn’t a @piersmorgan morning fan,” said one viewer. “You are not the first, imagine Susanna” said another.