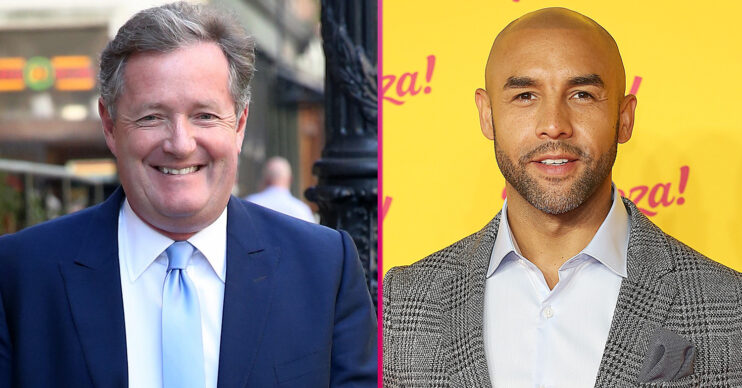 In latest Piers Morgan news, the star has taken another swipe at his former GMB co-star Alex Beresford.

Back in March, the pair clashed live on the programme over Meghan Markle and Prince Harry‘s Oprah Winfrey interview.

The spat resulted in Piers walking off set after Alex accused him of “trashing” the Duchess of Sussex.

Piers later quit Good Morning Britain and took aim at weatherman Alex in an interview, saying it was a ‘premeditated attack’.

What is the latest news about Piers Morgan?

Now, Piers made a dig at Alex calling him a “deputy, stand in weather person”.

Speaking about walking off set on Australia’s Today Programme, Piers said: “Most people think I never came back.

“I actually did come back a few minutes later and we had an interesting conversation.”

He continued to host Karl Stefanovic: “I don’t know if you have a deputy weather person… if you had a deputy stand in weather person suddenly letting you have it in a personal way, I suspect you wouldn’t like it either.

“I thought, ‘you know what, I will say something I will regret.’

“I don’t mind guests piling into me that’s fair game but not friendly fire from your own team, I wasn’t having that.”

Piers quit GMB after a backlash over his comments about Meghan and her Oprah interview.

The presenter said he “didn’t believe a word” the Duchess said.

During the chat, Meghan opened up about feeling suicidal during her pregnancy with Archie and claimed she didn’t receive help from the palace.

In addition, she alleged there were ‘concerns’ and ‘conversations’ within the family about Archie’s skin tone before he was born.

Thousands of viewers complained to Ofcom about Piers, and Meghan reportedly made a formal complaint to ITV.

During a discussion after the Oprah interview aired, Alex accused Piers of ‘trashing’ Meghan.

He said during an interview on Fox: “The moment he came on air, he came with a pretty premeditated attack on me on a pretty personal level and frankly I just wasn’t going to have it.

What did you think of Piers’ comments? Leave us a comment on our Facebook page @EntertainmentDailyFix and let us know.