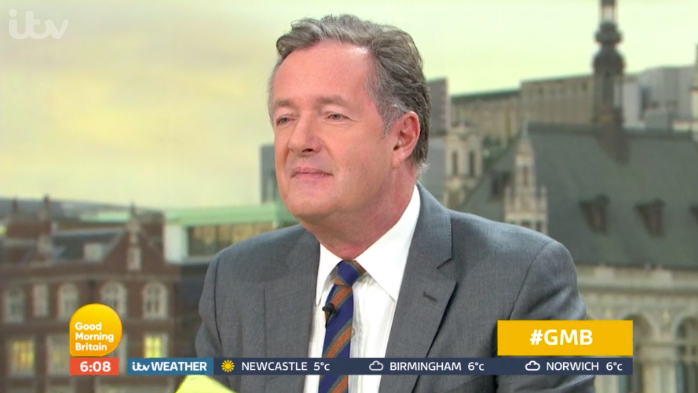 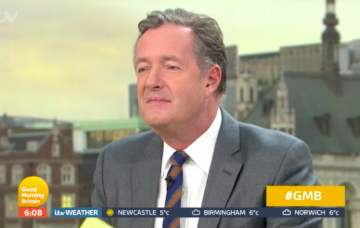 He's ramped up the feud even further

Just when you think things couldn’t get any tenser between Piers Morgan and Little Mix, the Good Morning Britain presenter has taken another swipe.

On Tuesday, Piers demanded an apology from band member Jesy Nelson after she called him a rude word during a radio interview.

Jesy, 27, had posted a couple of racy pictures to her Instagram – seemingly in response to the TV star’s recent comments about her and bandmates, Perrie Edwards, Leigh-Anne Pinnock and Jade Thirlwall.

The 27-year-old first shared a cute underwear shot, captioning it: “I woke up like this! (Definitely didn’t, took me a very long time to master this pose).”

She then added a second scantily-clad shot, which seemed more directly aimed at Piers, as the comment was simply three snake emojis.

I woke up like this! (Definitely didn’t took me a very long time to master this pose)

Hitting back on Wednesday’s GMB, Piers moaned about receiving angry messages about his sexist comments, ranting: “They’ve all come for me, you can’t beat the irony of this can you?

“Little Mix have launched a campaign to stop people being rude on social media and now I woke up to my Instagram and 3,000 messages from Little Mixers, and they’re all calling me a [bleep]. So I’m getting roundly abused.”

Speaking about the photos Jesy had shared online, the dad-of-four told viewers: “This apparently was her answer to me. I mean look at it!”

His co-star, Susanna Reid looked exasperated by his latest tantrum, responding: “Piers Morgan, are you blind? She clearly looks fabulous. She looks incredible.”

He replied: “She does not look fabulous. She’s wearing men’s underpants, she’s heavily tattooed, it’s bad lighting. It’s one of those grim pictures you get on those weird adult dating sites. The really cheap ones.

“How can anyone look at that picture and think that’s a classy picture? I’m serious. She’s just once again taking her clothes off saying, ‘Look at me, I’ve got this body, buy my album’.”

Susanna said he was “so rude, so rude” and deserved the attacks.

He continued: “I’ve got no time for it, this ridiculous, cynical use of naked flesh to sell records… I’m not shaming her, her fans are shaming me today. All of them. I’m not having it. By the way, most people agree with me, most people agree that actually what Little Mix are doing is cynical.”

Little Mix fans were angry that he was still trying to pick a fight with Jesy.

One wrote: “Is this stupid man ever going to stop?”

Another added: “Shut your worthless trap and leave women alone, they are doing something they love, at least they don’t criticise everyone on TV like you, god you should be fired.”

Others pointed out how Piers will do anything for a headline, tweeting: “@piersmorgan wouldn’t know a good singer if it smacked him in the face. He does everything now for shock value as he no longer as a real career. Nothing stops the mixers for you all. Especially Jesy #LM5.”

Another added: “Stop using little mix to get the attention you want. Get a life you fame[bleep].”

Only a few took Piers’ side, with one tweeting: “Unpopular opinion actually stand by @piersmorgan this time. I don’t like Little mix. Sorry not sorry but I can’t stand them.”

Read more: Piers Morgan says he would do I’m A Celebrity for £10 million

It followed a feud that kicked off on Monday, when the ITV presenter moaned about the band using sex to sell records.

Piers quickly responded, tweeting: “If you’re brave enough @LittleMix – come on @GMB tomorrow & say what you’ve just been saying about me on Radio One to my face. Then we can debate your cynical exploitation of nudity to sell records.”

If you’re brave enough @LittleMix – come on @GMB tomorrow & say when you’ve just been saying about me on Radio One to my face. Then we can debate your cynical exploitation of nudity to sell records.

When he failed to get a response from the group, he brought the topic up again on Tuesday morning, raving: “Little Mix, I think you need to make a public apology.”

Whose side are you on? Leave us a comment on our Facebook page @EntertainmentDailyFix and let us know what you think.