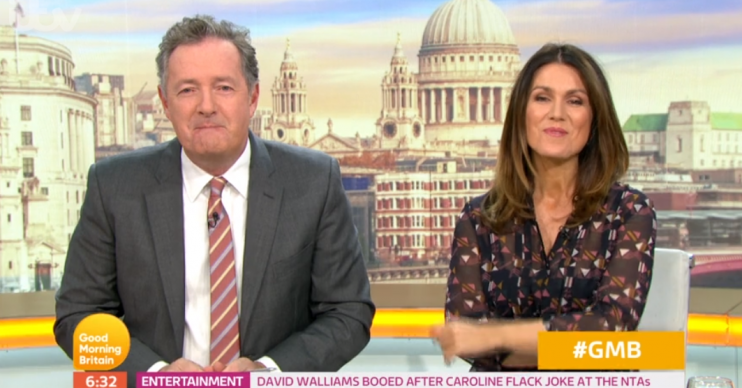 Presenter Piers Morgan was left cringing as he rewatched This Morning hosts Phillip Schofield and Ruth Langsford being ‘awkward’ with each other at the National Television Awards.

Amid rumours of an ongoing feud between Phil and Ruth, the pair got up on stage last night (January 28 2020) with Holly Willoughby, Eamonn Holmes and other members of the This Morning family to proudly accept the show’s 10th consecutive NTAs win.

On today’s episode of Good Morning Britain, Piers laughed and cringed in equal measure as he and co-host Susanna Reid watched a clip of Phil, Ruth and the others addressing the crowd during their acceptance speech.

“Look at us… oh…” Piers mocked, appearing to do an impression of Phil. “Oh we’ve won for the 10th year running.

“The best bit of that was when Phil got Ruth to say a few words on the stage. Awks! Hashtag awks. Don’t want to go there. It’s too… too much of a family.”

“I think you should say something,” Phil told her.

How awks was that?

Back in the GMB stuido, Piers laughed, “I think Ruth’s grin…” and did an impression of the presenter smiling awkwardly.

“I think the best bit,” Piers went on, speaking over a close-up of Phil standing next to Ruth and the latter giving him a wink. “How awks was that?”

But Susanna argued: “Oh she gave him a nice friendly wink!”

“That’s the kind of wink Michael Corleone gave Fredo,” Piers insisted, referring to a scene from the 1972 gangster flick The Godfather. Doing an impression of actor Al Pacino’s character, he added: “‘I know it was you!'”

However the moment on stage actually played out, Holly and Phil appeared to have had a ball at the NTAs.

The pair were back on our screens today presenting This Morning and, as usual, they seemed to be nursing almighty hangovers.