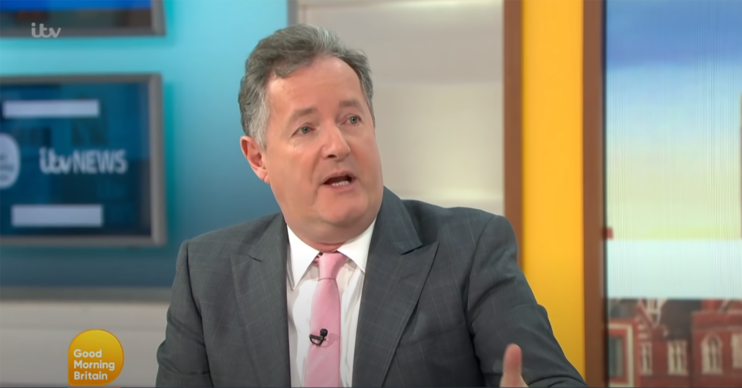 Piers Morgan has paid tribute to his GMB colleagues following his exit from the show.

Earlier this week, ITV confirmed the presenter was stepping down from the programme.

It came after Piers sparked over 41,000 Ofcom complaints for his comments about Meghan Markle‘s revelations in her Oprah chat.

Now, Piers has taken to Twitter to thank the team at GMB for the past five years.

He shared a group photo showing himself, Laura Tobin, Charlotte Hawkins, Susanna Reid and Richard Arnold alongside the crew members.

Alongside the snap, the star wrote: “I had one goal when I joined @GMB – beat @BBCBreakfast in the ratings. On my last day, we did it.

I had one goal when I joined @GMB – beat @BBCBreakfast in the ratings.
On my last day, we did it.
That was down to the hard work & dedication of the whole team.
They don’t all agree with me, some don’t even like me, but we were a team..and we won.
Thanks guys. I’ll miss you. pic.twitter.com/eOOmoZfmPT

“That was down to the hard work & dedication of the whole team.”

He added: “They don’t all agree with me, some don’t even like me, but we were a team..and we won. Thanks guys. I’ll miss you.”

Some of Piers’ fans spotted Alex Beresford – who clashed with Piers on the show this week – was missing from the picture.

The pair’s spat on the show sparked a heated debate and resulted in Piers walking off set.

A third wrote: “Did you sir, brush Alex out of this photo?”

One tweeted: “Funny how Alex Beresford is missing in that image, you’re so mature and grown up Piers.”

Meanwhile, ITV confirmed Piers had stepped down from the show on Tuesday.

It came after Ofcom said it was investigating Piers’ comments about the Duchess of Sussex following thousands of complaints.

During the interview, Meghan said she was suicidal while pregnant with Archie and claimed there were ‘concerns and conversations’ about how dark Archie’s skin colour might be when he was born within the royal family.

However, Piers said on GMB that he didn’t believe a word Meghan said in the interview.

Following his departure from the show, Piers stood by his comments on Twitter.

“I’ve had time to reflect on this opinion, and I still don’t. If you did, OK. Freedom of speech is a hill I’m happy to die on.