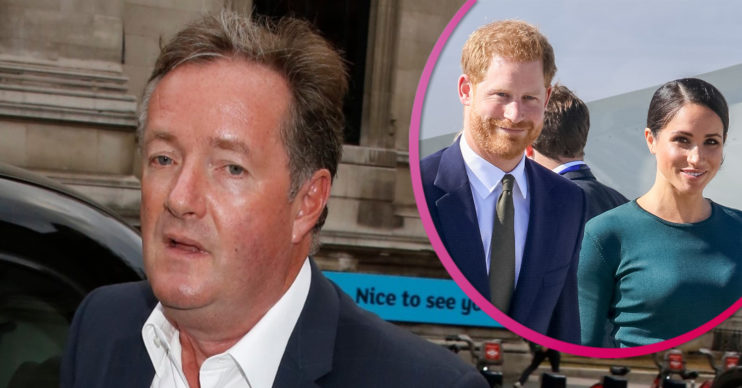 Piers Morgan has taken another swipe at Meghan Markle and Prince Harry on Twitter.

The Good Morning Britain presenter, 55, made a dig at the royal couple after their new website, Archewell, launched on Thursday.

On the full website for the non-profit foundation, the Duke and Duchess of Sussex told visitors they can “build a better world” by choosing “courage, healing and connection”.

The couple also paid tribute to their mothers, saying they “have experienced compassion and kindness, from our mothers and strangers alike”.

Following news of the website release, Piers shared his thoughts on Twitter as he branded the couple “ginge and cringe”.

As ITV News’ Royal Editor Chris Ship tweeted the news, Piers responded: “Sadly, Ginge & Cringe’s ‘compassion’ and ‘humanity’ doesn’t extend to either of their fathers, both of whom have been airbrushed out of this nauseating bilge.”

Fans were divided over Piers’ tweet, with some asking why he bothers to criticise the couple.

Sadly, Ginge & Cringe’s ‘compassion’ and ‘humanity’ doesn’t extend to either of their fathers, both of whom have been airbrushed out of this nauseating bilge. 🤮🤮🤮 https://t.co/DkVrwkqWQ9

One person said: “I don’t understand why you despise them so much?”

Another tweeted: “Why the bullying? There is no need to criticise his hair colour.”

I don’t understand why you despise them so much?

One added: “You really do have an unhealthy obsession with them and the hate that you harbour towards them is weird.”

However, others agreed with Piers.

Another wrote: “I am staggered by their hypocrisy and lack of compassion to their fathers. The Queen must strip them of their titles.”

Meghan and Harry’s message on their website paid tribute to their mothers.

It read: “I am my mother’s son. And I am our son’s mother. Together we bring you Archewell.

It continued: “Together, we can choose to put compassion in action. We invite you to join us.

Meghan and Harry pay tribute to their mothers

“As we work to build a better world, one act of compassion at a time.”

The backdrop behind the message showed pictures of Harry as a child with his late mum, Princess Diana.

In addition, another image showed Meghan as a young girl with her mother, Doria Ragland.