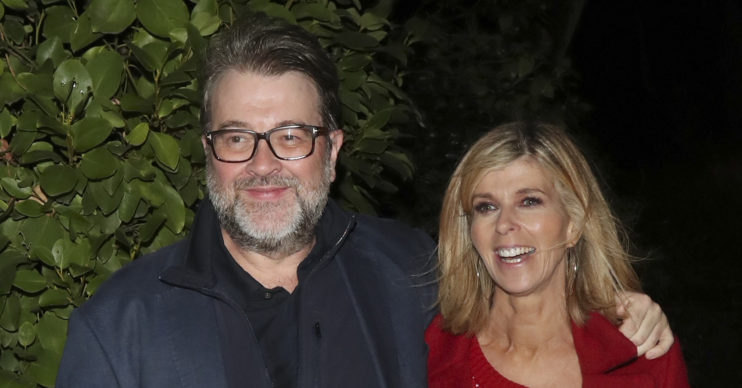 Piers spoke of Derek Draper being in ICU 'for many, many weeks'

GMB host Piers Morgan has paid tribute to colleague Kate Garraway on today’s show as he spoke of her “living hell”.

He opened up about her turmoil as guest Iain Duncan Smith passed on his well wishes.

Piers explained: “We haven’t talked about it much because Kate Garraway is going through a living hell like many people.

“Her husband has been in a very serious condition for many, many weeks.

“We can all just hope and pray he comes through it, but it’s been very, very difficult for Kate and her family.

“We miss her here at the show, but obviously we stay in touch with her a lot.

This followed a heartbreaking update on Derek’s health over the weekend as Piers was interviewed on TalkRadio.

Piers spoke of the many people he knows suffering from COVID-19.

He said: “I have a cousin whose father died of coronavirus. Had another friend of mine – a TV producer who I’ve worked with on foreign assignments – whose mum died in a care home last week.

“I’ve had Kate Garraway, who’s the Good Morning Britain co-presenter of mine – her husband Derek Draper is fighting for his life as we speak and has been for many weeks in an ICU unit.

“So I’ve been personally affected by this, by the sheer volume of friends of mine and family who have been directly impacted in the most horrific manner.

“So yeah, I do feel a personal attachment to this story. But I think most people, if they have a conscience, should.”

Lobbyist and author Derek was admitted to ICU on March 30.

He has remained there ever since. Kate and their children have been unable to visit him due to strict hospital rules.

Read more: Boy George asks Piers Morgan to do Gogglebox with him

Kate shared to her some 749,000 Instagram followers: “So our #nhsclap was a little different tonight. We still clapped & cheered as much as ever but I couldn’t film on my phone as had Derek on FaceTime throughout! – of course we can’t KNOW but I believe he can hear us & thought at least the incredible @nhs team’s looking after him would hear a fraction of our gratitude.”

So our #nhsclap was a little different tonight. We still clapped & cheered as much as ever but I couldn’t film on my phone as had Derek on FaceTime throughout! – ofcourse we can’t KNOW but I believe he can hear us & thought at least the incredible @nhs team’s looking after him would hear a fraction of our gratitude. Billy made this for his Dad’s carers to show how much he means to our family & to say thank you for fighting to bring him back to us. I am hoping they will let Derek have it by his bed. But even if they can’t THANK YOU from the bottom of our hearts – you are superheroes . Love to all in these terrible times – the separation from loved ones whatever the reason is so tough . #staystrong #staypositive #keephopealive

Earlier this month her other GMB co-presenter Ben Shephard said of Kate’s ordeal: “It’s a dreadful time and I think she’s at home with two children and trying to keep it going.

“It’s a total unknown. But as she said, as long as he’s here there’s absolute hope.”

“Twenty four hours at a time and she rightly pointed out, he’s getting extraordinary care, she gets the chance to phone in the evenings and talk to him.”

He added: “He’s not responding yet, I don’t think.”