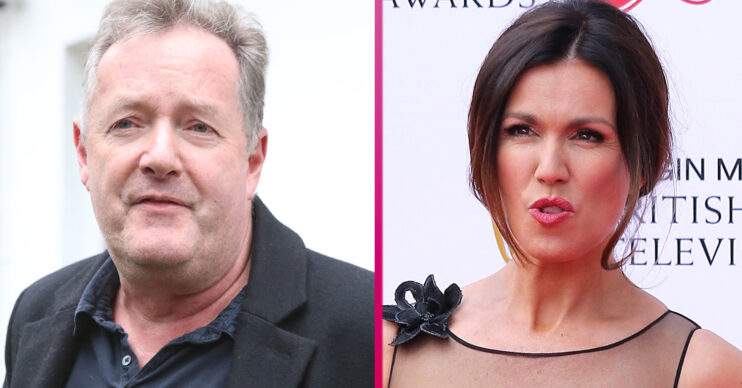 The pair had to host the show after the dispute

In latest Piers Morgan news, the star revealed he once hosted Good Morning Britain without “exchanging a single civil word” with Susanna Reid after a row.

The presenter, 56, said he and Susanna had a “blazing row” off air but viewers “barely noticed” because of their “fixed cheesy grins”.

Piers was sharing his thoughts on ‘feuding’ brothers Prince William and Prince Harry’s recent reunion at the unveiling of a Princess Diana statue.

Piers wrote in his Daily Mail column: “Susanna Reid and I once presented a whole three-hour episode of Good Morning Britain together without exchanging a single civil word on or off camera after a blazing row.

“But the viewers barely noticed thanks to our fixed cheesy grins and cheery chats with guests.”

He added: “Appearances can be deceptive.”

It came after a backlash over his comments about Harry and Meghan Markle’s Oprah Winfrey interview.

The star had said he didn’t believe a word Meghan had said, after she opened up about feeling suicidal and claimed she didn’t recieve help from the palace.

After his departure, Susanna delivered a message on air saying he was “without doubt an outspoken, challenging, opinionated, disruptive broadcaster”.

She added: “It is certainly going to be very different but shows go on and so on we go.”

Piers later discussed the statement and joked that his ex Marion Shalloe spoke about him “more fondly” than Susanna did.

He wrote in his Daily Mail column: “I got an instant flurry of new texts from bemused friends asking if we’d fallen out.”

Read more: Piers Morgan ‘would give both kidneys’ to interview Matt Hancock on affair scandal on GMB

Piers added: “She apologised for the tone of her chilly goodbye, which was for all the reasons I suspected…

“…and I apologised for leaving her in the lurch so suddenly.”

Do you miss Piers on GMB? Leave us a comment on our Facebook page @EntertainmentDailyFix and let us know.