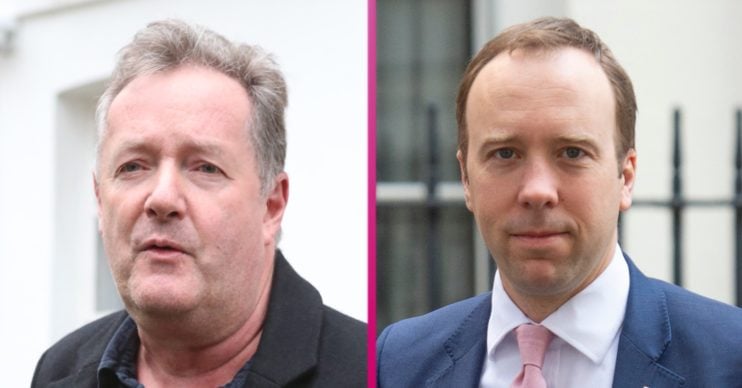 Piers Morgan – the TV presenter who just can’t stay out of the news himself – has taken aim at Matt Hancock once again.

Piers, 55, branded the recent issuing of a £60 charge to a medical worker as “disgusting” on Twitter.

And, true to previous pledges, the former journalist also offered to pay the fine out of his own pocket.

Piers Morgan is given the news about an NHS parking fine

The TV presenter retweeted an image of a parking charge notice sent in his direction by a follower this afternoon.

The upset social media user explained: “The missus has worked throughout this whole pandemic on the front line.

“Disappointed when she gets called in for a 12-hour shift on her weekend off, to be charged £60 as the hospital has decided to start charging staff again.”

A furious Piers launched a broadside at Matt Hancock within minutes of the original tweet being posted.

How did Piers react?

He fumed: “Disgusting. Why the hell are you still allowing this to happen, @MattHancock , when you promised it would stop?”

Piers also noted the follower supports the same football team as him and generously said he’d stump up if necessary.

He continued: “Anyway, Jason, as you’re a fellow Gooner and your wife’s an NHS hero, DM me this fine and I will either shame @BTHFT into dropping it, or pay it myself.”

Disgusting.
Why the hell are you still allowing this to happen, @MattHancock, when you promised it would stop?
Anyway, Jason, as you’re a fellow Gooner and your wife’s an NHS hero, DM me this fine and I will either shame @BTHFT into dropping it, or pay it myself. https://t.co/2HSZ7es0JS

Several other Twitter users also suggested they could pay on the user’s wife’s behalf.

But many hundreds more were impressed by Pier’s kind gesture.

One person tweeted: “I like this version of @piersmorgan since he freed himself from the shackles of @GMB. You’re turning into the ‘People’s Crusader’.”

And a third Twitter user added: “Most of the time Piers Morgan you annoy the hell out of me. But every now and then you’re an absolute legend. I tip my hat to you.”

It isn’t the first time Piers has stepped in to pay a hospital parking fine.

Last year he vowed to absorb the cost after insisting charges should be waived for staff working through the coronavirus pandemic.

He said during a GMB broadcast in March 2020: “I will say now, to any health worker during the future of this crisis, however long it lasts, if any of you get a parking ticket, at a hospital where you’re working, I will pay it for you.

“I will pay for it, and I will then go to the government and have the battle, and you don’t get involved.”