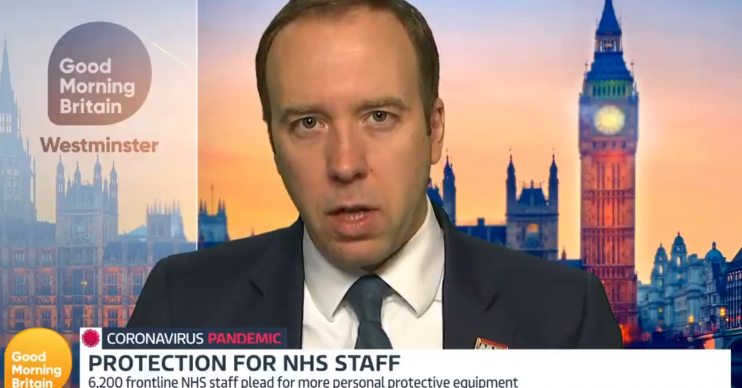 Some praised the TV host for asking the important questions about the government’s approach to the coronavirus pandemic.

However, others were frustrated as Piers Morgan continued to interrupt the Health Secretary’s answers.

Piers Morgan accused the government of not testing people for COVID-19.

He also demanded to know why they were not enforcing safety measures in supermarkets, as seen in Italy.

“Why have you not ordered supermarkets to have two metres distance? What about public transport? Order them to what is stopping you?”

The Health Secretary struggled to respond to these questions, as he was repeatedly interrupted by Piers.

He said: “I don’t think it helps not letting me answer the questions.”

The Health Secretary was challenged as to why the UK was not in lockdown, like the rest of Europe including the Republic of Ireland.

Matt Hancock reassured GMB viewers that “Those countries are further along in this crisis and this is in further review.”

However, Piers was having none of it and he continued to rant and talk over his guest.

Some viewers rallied to support the Good Morning Britain host on Twitter.

One said: “Matt Hancock just completely ignores the question and goes on to deliver entirely his own statement in accordance with the government’s current stance… Grow a pair and show some transparency! #gmb”

While another agreed: “Safe to say the health secretary lost this argument well done @piersmorgan #gmb @GMB Matt Hancock looks like he’s about to cry.”

However, most viewers were annoyed that Piers Morgan wouldn’t give Matt Hancock a chance to speak.

“I really like how @piersmorgan challenges interviewees but sometimes I wish he would be quiet while they’re answering and not interrupt so much. Not an enjoyable interview for anyone and you don’t get any answers which renders the interview pointless. #gmb”

One said: “What the country needs now is to hear calm, reassuring answers from the Government – @piersmorgansadly gave @MattHancockno chance to do so on @GMBby constantly interrupting him. A real shame, that was a great chance for the Health Secretary to inform us. #GMB #piersmorgan”

Some found the interview frustrating but agreed that tighter measures should be enforced in order to contain the virus.

One viewer said: “Morgans interview technique can be frustrating but the government’s messaging has been mixed and confusing, especially when you look around at other countries and see what their government’s are doing. #gmb”

After a lengthy row that got more heated on Piers side and saw an eye roll from the Health Secretary, Matt Hancock clarified : ” We have kept the same strategy throughout, we will do the right things at the right time based on the science. ”

Piers then asked if he or the Prime Minister Boris Johnson had taken a coronavirus test.  The Health Secretary replied that they had not.

'The number of people not following the advice is incredibly damaging to the effort to stop the spread of the virus.'

Health Secretary @MattHancock says people need to follow the social distancing advice to stop the spread of the virus. pic.twitter.com/WS8HIcuzI0

He concluded that it was not the government’s fault but society who were not following the recommendations and “going into mass gatherings.”

“We need to calm down a little bit and things are going down the right path.”

Have you been affected by coronavirus? Do you think the government is doing enough? Or do you agree with Piers Morgan? Leave us a comment on our Facebook page @EntertainmentDailyFix and let us know what you think.